Al Ahly, Pitso agree to stay together – for now

'Mosimane did not ask for any increase,' say Ahly in a statement. 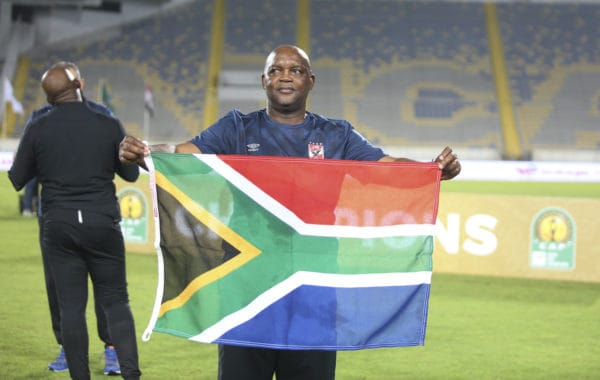 Pitso Mosimane will stay on as head coach of Al Ahly until the end of this season. Picture: BackpagePix.

Egyptian giants Al Ahly have confirmed that Pitso Mosimane will stay on as their head coach until the end of the current season, but at the moment there is no agreement to extend his contract.

There have been plenty of rumours that Mosimane could leave the Red Devils before his current contract expires in 2022.

Ahly, however, released a statement on Wednesday evening where they said that Mosimane had agreed to stay on to the end of this season, without a pay rise.

“Tawfik announced that Mosimane will continue his current contract with the club, which lasts until the end of the 2021/2022 season, without any pay raise.

“Tawfik added that Mosimane did not ask for any increase in his salary and that the club wants him to stay because Al Ahly is convinced with his ability to fulfill the goals and expectations of Al Ahly fans.

“Additionally, Mosimane expressed his happiness to work at Al Ahly and stated that he wants to continue his mission with the African Club of the Century.

“Finally, Tawfik concluded by saying that the discussions went in a friendly way about the team’s future and that both parties agreed on settling all the matters by the end of the current contract.”

He did, however, fail to win the Egyptian Premier League title last season, losing out to Cairo rivals Zamalek.