'He has been working very hard during the break, this will give him a lot of confidence going forward,' said the Matsatsantsa coach 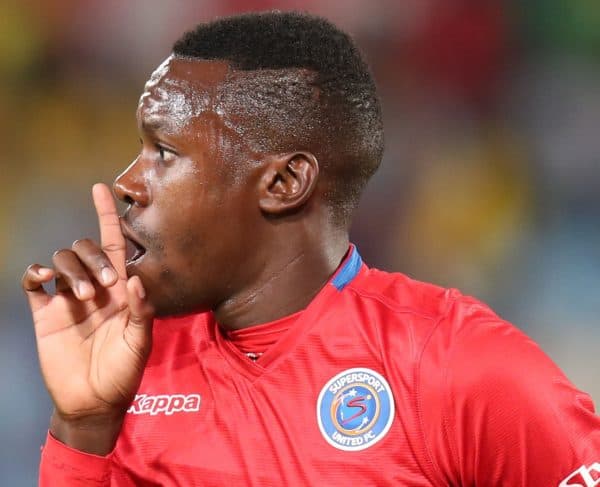 Ghampani Lungu was the star of the show on Saturday evening for SuperSport United after he came off the bench and propelled Matsatsantsa A Pitori to a 2-0 win over Baroka FC at the Lucas Moripe Stadium.

It was the youngsters’ maiden goals of the DStv Premiership campaign and his coach, Kaitano Tembo says his improvement is down to the spade work they did during the recent Fifa international break.

“He has been working very hard especially during the Fifa break and I am happy for him, he deserves the goals he scored because he took them very well and it gives him a lot of confidence going forward,” said Tembo.

While United bagged the three points, the mentor was not entirely pleased with the overall performance, saying he was forced to sacrifice midfielder Jamie Webber for the more attack minded Lungu, who did well to exploit the left flank where Tembo spotted some weakness.

“I was not quite happy with the performance in the first half but in the second one, we recollected ourselves because we wanted to get behind them, especially on their left side because they played Denwin Farmer and he is naturally a centre-back, that’s why we brought in Lungu and he did that and he used his two chances very well.

We had to dig deep and work hard in that game because we were up against a very good team. They are structured and we had to match their work ethic,” said Tembo, before he went on to laud his rear guard.

SuperSport have only conceded two goals this season in seven games, with the only team with a better record being defending champions Mamelodi Sundowns who have not let in a single goal so far. United’s next appointment is a visit from Kaizer Chiefs.

“Last season we were not solid, we used to give away goals and we are difficult to score against. This is the foundation of any team because we know that we always create chances and it gives our attacking players more freedom going forward,” said Tembo.