Themba Zwane scored twice to give The Brazillians an advantage ahead of the return leg in Pretoria. 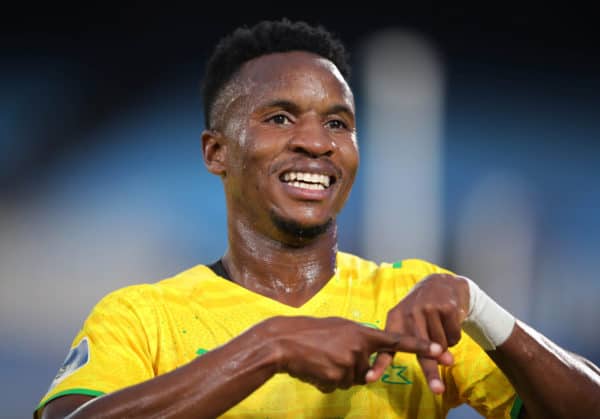 Mamelodi Sundowns might not have dished out their usual ruthless performance against Maniema Union but they can surely pat themselves on the back for chiseling out two away goals in the Democratic Republic of Congo, where they held Maniema to 2-2 in the first-leg of the Caf Champions League group stage qualifier.

ALSO READ: Pirates winless on four ahead of Maritzburg trip

While they might not have been the well-oiled machine that we’ve come to know, but they still were no pushovers as they got their nose in front as early as the 9th minute, thanks to their talisman Themba Zwane, who later completed his brace with about five minutes to go before full-time. It was 2-1 at the time Zwane netted his brace and it all looked set and done for Masandawana, but Junior Mutwale had other ideas as he stunned goalkeeper Denis Onyango with a bolting strike to level matters and ruin Masandawana’s day.

The hosts scored their opening goal in the 39th minute as, at the time, leveled matters through Rodrigue Kitwa, meanwhile, Downs were bossing around the tie but what Maniema appeared to have done right was to tame the lethal Peter Shalulile as though they had studied the tracks and movements of Shalulile ahead of the game.

Maniema somehow managed to marginalize him by cutting off and intercepting most of the balls to the potent Namibian striker, which also frustrated his striking partner Pavol Safranko, as both forwards were starved of some action and forced to search deep for the ball.

With little supply and action coming his way – as the match shifted into a cagey approach towards the latter stages of the second stanza – Downs coaches decided to withdraw Safranko and brought on Sibusiso Vilakazi in the last 15 minutes of the tie. Vilakazi’s first impression on the match was to look for a Shalulile who was on his bike. “Vila”, as he is affectionately known, did everything right to beat his markers on the right flank but his cross was just not as good as his effort was easily dealt with by Maniema’s rear guard.

The sides will lock horns again on Friday, October 22 in the capital city where Downs’ away goal might come in handy as they look to make into the group stages for the seventh season on the spin.