The skipper heads in the winning goal. 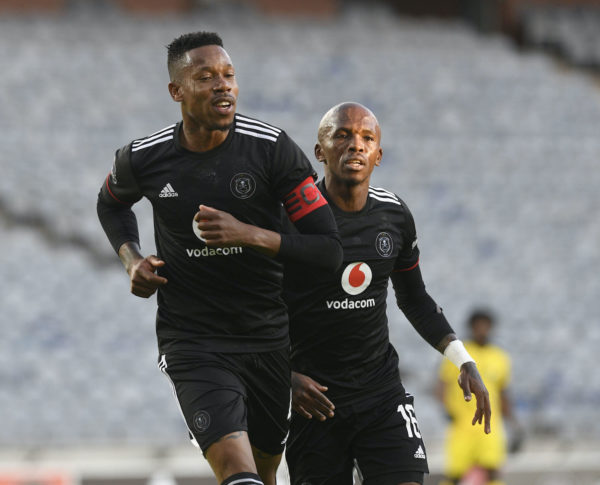 Happy Jele led Orlando Pirates to the next round of the Caf Confederation Cup qualifiers yesterday, with his solitary goal seeing the Buccaneers knock out Congolese side Diables Noirs 1-0 at Orlando Stadium.

Jele’s goal came in the first half, and the visitors found it difficult to create chances against a stubborn Buccaneers rearguard. However,  Pirates were also wasteful in front of goal, with Linda Mntambo and Terrence Dzvukamanja the main culprits.

It was bound to be an electrifying affair between the two sides following their goalless draw in the first leg in Congo last week. The home side needed a victory to guarantee a place in the final qualifying round for the group stages, while the visitors would have been happy with any score draw.

It was Pirates who started the game like a house on fire, putting pressure on their opponents from the early moments. Just seven minutes into the tie, Dzvukamaja thought he had managed to give the Buccaneers a dream start, but his goal was ruled out for an offside following a goodcross by Mntambo.

Mntambo seemed to be continuing with his fine form from the last two games, with the midfielder putting in a good shift for Pirates. In the 17th minute, the Soweto giants got a corner which was well met by the header of skipper Jele to put Bucs in the lead.

Diables started to pick-up their tempo, with some scares in Siyabonga Mpontshane’s penalty area, but Bucs held on to their lead into half time.

Back from the interval, Pirates seemed to be still in control of the game, with the Black Devils key players Jeremie Mumbere and Lorry Nkolo finding it hard to unlock the Bucs defence. The Buccaneers could have easily extended their lead, but Mntambo squandered the opportunity with only the keeper to beat after being put through on goal by Fortune Makaringe.

Despite a number of missed opportunities by the home side and Diables trying everything they can to get an equaliser, Bucs eventually walked off the pitch victorious.