AmaZulu brought down to earth by Sekhukhune United

The home side finished the game with 10 men. 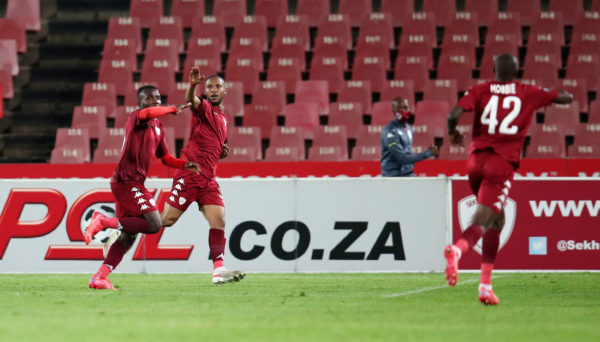 Chibuike Ohizu of Sekhukhune United celebrates a goal with teammates during the DStv Premiership 2021/22 match against AmaZulu on Wednesday at the Ellis Park Stadium, Johannesburg. (Muzi Ntombela/BackpagePix)

Sekhukhune FC took advantage of a seemingly tired looking AmaZulu FC side, as they beat them 2-0 in a DStv Premiership match at the Ellis Park Stadium on Wednesday.

This is despite the fact that the home side finished the game with 10 men following the sending off of Pogiso Mahlangu.

Usuthu, who were in a joyous mood this past weekend after successfully going through to the group stages of the Caf Champions League following their 1-1 draw with TP Mazembe in Lubumbashi having played to a 0-0 draw at home – winning the tie on away goals rules, were brought down to earth in the domestic league.

The KwaZulu-Natal based outfit couldn’t get things right, while everything was going smoothly for Sekhukhune. But, they wasted a number of chances in the first half and AmaZulu keeper Veli Mothwa made some great saves.

AmaZulu had some attempts at goals, but it was Augustine Mulenga who saw his shot being blocked from close range by Nyiko Mobbie, leaving the two sides going into the break goalless.

In the second half, the Limpopo based team started to do things right and they were immediately rewarded with a strike by former Kaizer Chiefs midfielder Willard Katsande in the 48th minute.

Three minutes later, Chibuike Ohizu extended Sekhukhune’s lead, with Usuthu showing no signs of fighting their way back into the game.

Mahlangu unfortunately got his second yellow card of the game after a foul and was sent for an early shower in the 70th minute, leaving AmaZulu with one man advantage. Despite a number of changes made, the KZN outfit couldn’t match Sekhukhune on the day.

Babina Noko have now jumped to fourth place on the log with 14 points after games and AmaZulu remain in position eight with 10 points from the same number of matches.

Meanwhile, in the other game played earlier, Cape Town based outfit Stellenbosch FC jumped to second place on the log standings after beating Marumo Gallants 1-0 at the Danie Craven Stadium.

An Ashley du Preez strike in the 27th minute sealed the maximum points for Stellies, who are now on 16 points after eight games, three points behind top of the table side Mamelodi Sundowns, who are on 19 points but have one game in hand.

We have not won anything yet, warns Chiefs star Billiat
4 hours ago
4 hours ago

We have not won anything yet, warns Chiefs star Billiat
4 hours ago
4 hours ago