The Buccaneers can only manage a sixth stalemate of a disappointing season so far. 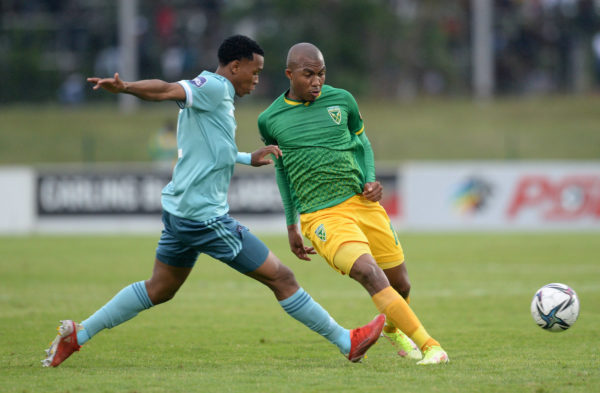 Thabani Zuke of Golden Arrows gets his pass away as he is challenged by Boitumelo Radiopane of Orlando Pirates. Picture: Ryan Wilkisky/BackpagePix.

Orlando Pirates registered their sixth draw of the season after failing to hit the back of the net against Golden Arrows at the Princess Magogo Stadium on Saturday.

Pirates’ came into this tie looking to get back to winning ways, following their 2-1 defeat to Kaizer Chiefs in their previous game, just before the international break.

The result means Pirates have only been able to register 15 points in their first 11 games of the season, sitting in position seven on the log.

Meanwhile, the hosts are now on 12 points from the same number of matches, while occupying ninth place on the league standings.

The Buccaneers started the tie strongly, making a lot of goal attempts in their pursuit to get an early lead.

Striker Kwame Peprah was first to test Nkosingiphile Gumede just before five minutes, but the Arrows keeper was able to make a save, while Linda Mntambo got a chance to score from a set-piece, but his shot was blocked by the home side’s wall.

Arrows managed to cause a scare in the 23rd minute, but Nduduzo Sibiya’s shot was poor.

Towards half-time, Pirates’ had another opportunity to go in front from a Deon Hotto’s well taken free-kick, but he was unfortunately denied by the crossbar, with Gumede looking beaten.  At the other end, Sibiya delivered an inviting free kick inside the Pirates box, but Siyabonga Mpontshane dealt with the danger. The teams went into the break deadlocked at 0-0.

Both sides looked rejuvenated in the second half, looking for the opener. The KwaZulu-Natal side came close to finding the back of the net in the 50th minute with Siboniso Congo going for a high ball in the area, but he ended up colliding with Mpontshane.

Substitute Ntsako Makhubela made his way into the Arrows box in the 71st minute with a chance to score against his former side, but the midfielder was unable to get his shot away.

The Bucs technical team gave academy graduate Boitumelo Radiopane his debut, with the youngster coming on for Paseka Mako. Radiopane, who has been scoring goals for the Bucs’ reserves in the DStv Diski Challenge, wasn’t able to help the senior team get maximum points.