Orlando Pirates lay down the law on wayward Mhango

The striker was reported to have failed to settle a R26 000 bill at a club in Pretoria. 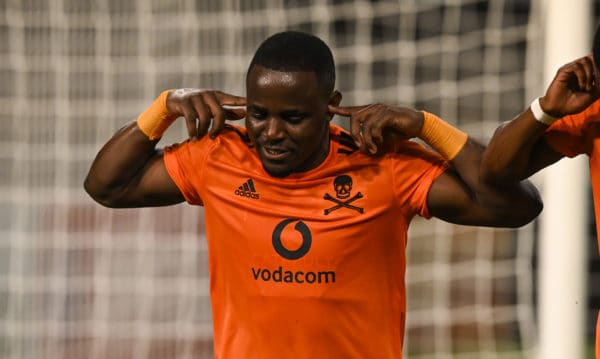 Orlando Pirates are said to have given Gabadinho Mhango a strong warning following a spell of bad publicity last week. (Gerhard Duraan/BackpagePix)

Orlando Pirates management are said to have had a tough talk with Malawian striker Gabadinho Mhango, following a spell of bad publicity last week.

Phakaaathi later learned that Mhango was at the club with ‘slay-queens’, who were ordering expensive booze on behalf of the Pirates striker.

“Mhango was surrounded by beautiful girls at the club, they call them ‘slay-queens’ . He was having fun throughout the night. Unfortunately, those girls are the ones who got him in this mess. It’s so embarrassing for someone like him to end up being held at the club because he couldn’t pay the bill. But I heard that he made a deal with the guys at the club that he will sort it (the payment) out,” said the source who was at the nightclub.

According to an insider at the Soweto giants, Mhango has been given a strong warning and another wrong move could see him being severely fined.

“Gaba doesn’t listen, this is not the first time he got caught up in such a mess. It’s just that some things that he has done were not made public,” said the source.

“But the bosses (management) have had it with him, they have given him a tough talking-to and he has apologised for everything. He knows that if he gets bad publicity again he will be fined heavily. What angered the management was the fact there were videos of him circulating all over social media. But, I believe that he has learnt his lesson. He knows that he has to be a good role model. He’s not just representing himself, he is a Pirates player and can’t give the club a bad image.”