OPINION: It’s time for PSL to introduce VAR after that Chiefs blunder

The That dubious penalty call that Chavani gave to Chiefs was nothing, but a nonsensical call. 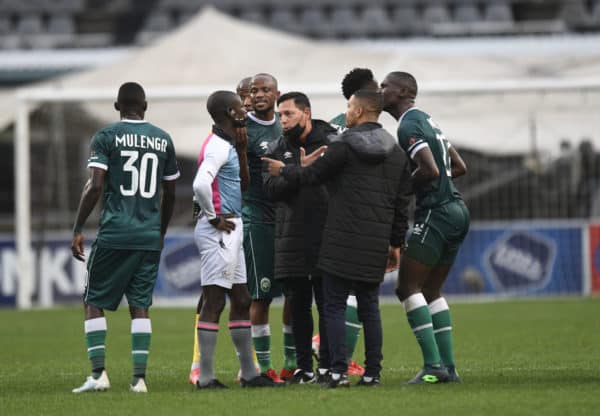 Referee Jelly Chavani being questioned by the AmaZulu players during the DStv Premiership match between Amazulu and Kaizer Chiefs at Jonsson Kings Park. (Photo by Sydney Mahlangu/BackpagePix/Gallo Images)

The recent officiating error by referee Jelly Chavani in the DStv Premiership match against Kaizer Chiefs and AmaZulu FC last weekend clearly says a lot about the need for the Premier Soccer League (PSL) to speed up things in introducing the Video Assistant Referee (VAR) in the league.

That dubious penalty call that Chavani gave to Chiefs was nothing, but a nonsensical call, which cost Usuthu a huge two points.

To be fair, AmaZulu were on top of Amakhosi in that game and they looked to be the better side for the most part of the match, which to me they were deserved winners od that match on the day, which ended up being a 1-1 draw after Keagan Dolly score the penalty in injury time to cancel out Luvuyo Memela’s 48th minute strike.

This is not the first time Chavani has made such an error, he was also in the centre stage of controversy early this year and he has subsequently been suspended together with fourth official Moeketsi Molelekoa for their mistake in the Chiefs versus AmaZulu match.

As I think about the many errors that have happened in the league, I know that match officials are human beings and are bound to make mistakes, but the Chavani error is something out of the ordinary. Which to me, I believe the introduction of the VAR system is the way to go. The VAR is said to cost around US$6.2 million (R87 million) per season. But I am certain this is something  the PSL board can work out, after all, there are always sponsors lining-up to be part of the league.

Another thing is that the PSL prides itself as the biggest league in the continent, and if our league is really the best, then we should be the first ones to be using the VAR in Africa. By getting that technology we won’t only be eliminating the blunders made by the likes of Chavani, but we will be helping teams like AmaZulu to get their well-deserved victories. My worry is, what if it comes to a point where Usuthu only needs two points to win the league at the end of the season?