Thierry Henry suffered defeat in his first match as a head coach when his 10-man Monaco side slumped to a 2-1 loss at Strasbourg on Saturday to drop into the Ligue 1 relegation zone, while Paris Saint-Germain eased to a 10th straight victory to start their title defence. 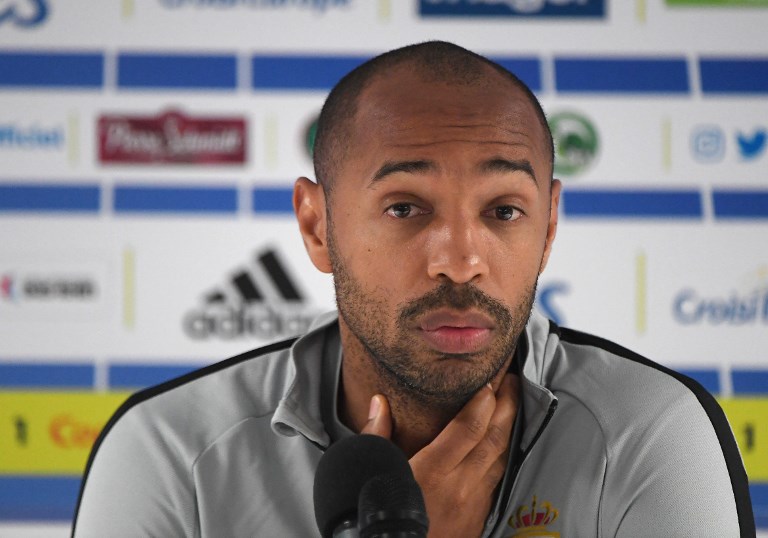 Monaco's French Coach Thierry Henry speaks during a press conference following the French L1 football match between Strasbourg (RCSA) and Monaco on October 20, 2018 at the Meinau stadium in Strasbourg, eastern France. - Thierry Henry suffered defeat in his first match as a head coach when his 10-man Monaco side slumped to a 2-1 loss at Strasbourg to drop into the Ligue 1 relegation zone, while Paris Saint-Germain eased to a 10th straight victory to start their title defence. (Photo by FREDERICK FLORIN / AFP)

The principality club have failed to win in 11 games in all competitions since the opening weekend of the French top-flight season, and are only above bottom team Guingamp on goal difference.

Monaco, who were runners-up to PSG last season, are now 24 points adrift of the reigning champions after they cruised to a 5-0 thrashing of Amiens at the Parc des Princes despite resting several key players.

A dreadful error by Monaco’s third-choice goalkeeper Seydou Sy gifted Strasbourg midfielder Adrien Thomasson an early opener, and substitute Samuel Grandsir was sent off midway through the second half.

Lebo Mothiba doubled the advantage, and a late Youri Tielemans penalty was a mere consolation for the 2017 Ligue 1 title-winners.

Henry — a World Cup winner and Arsenal’s all-time record goalscorer who started his playing career at Monaco — made four changes to the team which lost to Rennes before the international break, with former Manchester City and Inter Milan striker Stevan Jovetic restored up front.

But his new side got off to the worst possible start as they handed Strasbourg a 17th-minute lead.

Kenny Lala’s long ball forward was nodded hopefully towards goal by Thomasson, but Senegalese ‘keeper Sy — who was only playing due to injures to Diego Benaglio and Danijel Subasic — comically fumbled the ball over his own line.

A disappointing first half ended poorly for Henry and Monaco, as captain and star striker Radamel Falcao was forced off injured.

Monaco started the second half quickly and almost equalised when centre-back Kamil Glik’s volley was hacked off the line by home defender Lala.

But it was proving a miserable debut for Henry, as just two minutes after being brought on as a substitute, Grandsir was given a straight red card for catching Anthony Goncalves in the hip with a high boot, with the Strasbourg winger collapsing to the ground holding his face.

As the visitors pushed for an equaliser, they were hit on the counter-attack in the 84th minute as South African international Mothiba raced clear before a cute lob gave him his seventh goal of the season for club and country.

Tielemans pulled one back with an injury-time spot-kick after Moussa Sylla was brought down in the area, but it proved too little, too late.

Coach Thomas Tuchel left key men Neymar, Thiago Silva and Thomas Meunier out of the squad altogether at the Parc des Princes with Wednesday’s Champions League clash with Napoli in mind, but PSG had more than enough to see off Amiens.

“Everyone thinks that Ligue 1 might be too easy to prepare for the Champions League, but it’s not like that,” insisted Tuchel, who took over the reins from Unai Emery in the close-season.

“That would mean you’re blaming the other teams, but we focus on ourselves. Nobody won 10 games in a row, and we did it.”

Brazilian centre-back Marquinhos nodded the hosts into a 12th-minute lead and Adrien Rabiot made it two shortly before half-time.

Germany winger Julian Draxler grabbed the third headed goal of the game, and the 19-year-old Mbappe fired in late on to score his ninth goal in just six league outings this season.

It was a horrid mismatch with Amiens utterly outclassed, and teenager Moussa Diaby came off the bench to complete the rout as the capital-city giants maintained their commanding eight-point lead at the top of the table.

Elsewhere, second-placed Lille continued their strong start to the campaign as goals from Nicolas Pepe and Luiz Araujo sealed a 2-1 win over Dijon.