Paris Saint-Germain are again sweating on Neymar's fitness on Sunday after the superstar attacker left the field at Bordeaux clutching his groin before Andreas Cornelius' late header ended the French champions perfect start to the Ligue 1 season. 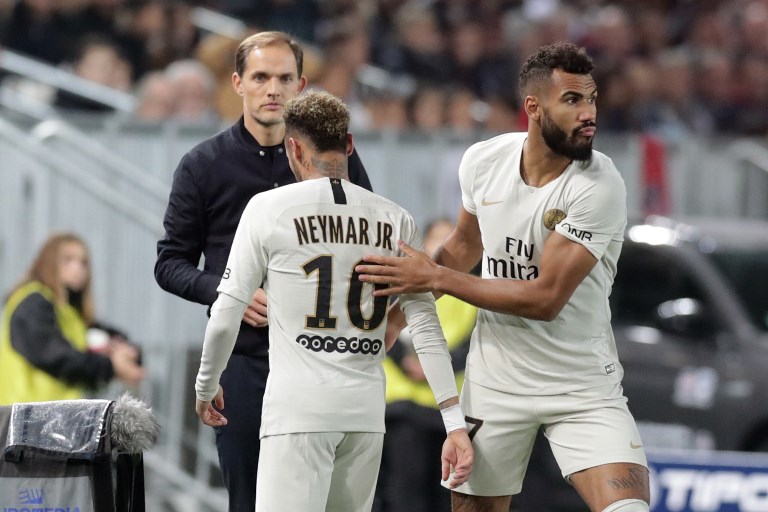 Brazilian Neymar was substituted 57 minutes into the hugely entertaining 2-2 draw the Matmut Atlantique stadium, in which he had opened the scoring and had looked in great form before having to head to the dressing room with what looks to be an injury to the same adductor muscle that nearly stopped him from scoring the decisive goal in Wednesday’s huge 2-1 win over Liverpool.

“I don’t know at all (what his injury is). We have to be careful, he said it was not a problem to play tonight but the pitch was hard and I hope he will be in good shape after Strasbourg,” said PSG coach Thomas Tuchel, referring to his side’s must-win final Champions League group game at Red Star Belgrade in nine days’ time.

The Ligue 1 leaders, who had won all 14 of their league matches going into Sunday’s pulsating clash, had to wait until the last minute to see if Neymar and strike partner Kylian Mbappe would be ready for the win over the Reds, who now face an uphill battle for qualification to the Champions League last 16 thanks to Neymar’s first-half winner last week.

The pair twice put PSG in front on Sunday, but Jimmy Briand and Cornelius ensured that Bordeaux became the first French team to stop the runaway leaders this season.

However the result is unlikely to slow down PSG’s march to the title, as they still stand 14 points ahead of nearest challengers Montpellier, who took advantage of Lyon drawing 2-2 at Lille to sneak into second with a 2-1 win at Thierry Henry’s struggling Monaco on Saturday.

PSG’s arch rivals Marseille failed to make the most of their fellow Champions League chasers dropping points after a goalless draw at Reims on Sunday. Rudi Garcia’s side stay fifth.

Neymar’s opener for PSG came after a spell of concerted Bordeaux pressure and at the end of a superb exchange with countryman Dani Alves, who on his first start of the season flashed in a powerful cross that was crashed home first-time by number 10.

His 11th league goal of the season took some time to be awarded however, as the VAR dithered over whether Mbappe was offside and interfering with the play as he flashed a leg at Neymar’s shot.

That goal looked to have broken Bordeaux, and Angel Di Maria, who had fluffed a golden chance laid on for him by Neymar earlier in the half, then struck the post in first-half stoppage time as the home side rocked under pressure.

However the hosts fought back again after the break, and they got their first reward when Briand slotted home a fine cross from the lively Yann Karamoah.

Neymar was substituted shortly afterwards and Bordeaux smelled blood, but Mbappe turned the match in PSG’s favour, latching on to Julian Draxler’s through ball before crashing home what looked to be the winner and almost immediately asking to be substituted with an apparent muscle problem.

Tuchel didn’t remove the 19-year-old however, and he was there to see Cornelius meet Maxime Poundje’s cross with such force that PSG keeper Alphonse Areola couldn’t stop his header from crossing the line and ending PSG’s 100 percent start.