Hugo Lloris has warned Arsenal that Tottenham are determined to avenge their recent north London derby despair when the rivals clash again in the League Cup quarter-finals on Wednesday. 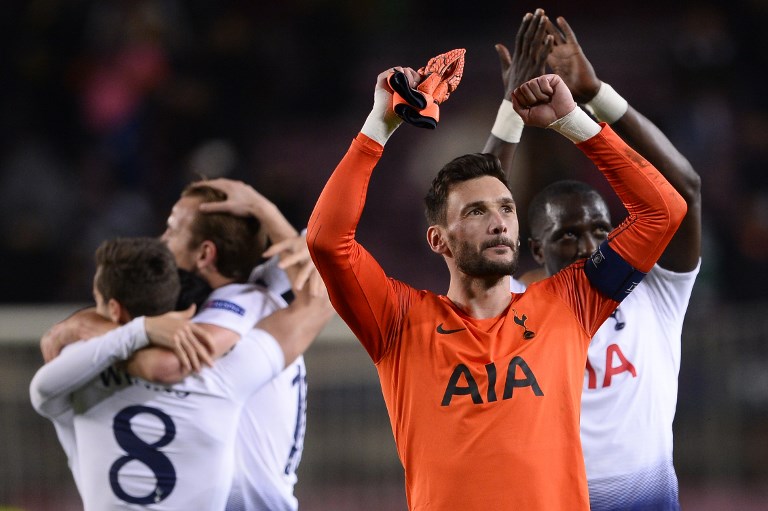 Tottenham Hotspur's French goalkeeper Hugo Lloris and teammates celebrate their qualification for the next round during the UEFA Champions League group B football match between FC Barcelona and Tottenham Hotspur at the Camp Nou stadium in Barcelona on December 11, 2018. (Photo by Josep LAGO / AFP)

Mauricio Pochettino’s side make the short trip the Emirates Stadium just over two weeks after crashing to a 4-2 defeat at the hands of their bitterest of neighbours in the Premier League.

Tottenham led 2-1 on that occasion but fell apart in the second half as Arsenal hit back to claim their second successive home win in the north London derby following last season’s 2-0 success.

The fiery encounter featured a brawl between players from both teams after Tottenham’s Eric Dier enraged Arsenal with a provocative goal celebration.

Tottenham fans were also in trouble after a banana skin was thrown at Arsenal’s Gabon striker Pierre-Emerick Aubameyang as he celebrated his goal in front of the away end.

Adding to the toxic mood around the clash, Arsenal’s stars weren’t shy about taking to social media to brag about their victory, with Gunners goalkeeper Bernd Leno’s post of a picture of the team celebrating brand disrespectful by Pochettino.

Pochettino insists Tottenham’s improvement during his reign means they no longer need to be obsessed about making derby victories the highlight of their season.

But Tottenham goalkeeper Lloris insists his team would love to make amends for their painful loss earlier this month.

“Maybe it’s a good thing that we lost the Premier League game a few weeks ago because it is more motivation for us,” Lloris said.

“There are no more bad feelings than when you get a defeat. It is another opportunity and we will try our best to go through.

“Every game that you lose it hurts, but of course when you lead 2-1 it’s worse.

“It’s true Arsenal are playing very well and are a difficult team to beat, but I think we have the quality to do it.”

Pochettino and Arsenal manager Unai Emery may be tempted to field under-strength teams to rest their key players ahead of a hectic Christmas schedule.

But Lloris is adamant Tottenham — yet to win a trophy under Pochettino — need to take the competition seriously, especially given it is Arsenal standing between them and a place in the semi-final.

“It is important to take every competition seriously, whatever the competition is,” he said.

“Of course there is priority in the season but it is a League Cup game and if you go through there is a semi-final and a good chance.

“And then it is a derby so it is easier to prepare for because there’s always excitement and enjoyment to play that type of game.”

Tottenham’s loss in their last visit to Arsenal is the only time they have tasted defeat in 11 games.

That run included an impressive draw at Barcelona in the Champions League that secured their place in the last 16.

In contrast, a surprise 3-2 Premier League loss at lowly Southampton on Sunday ended Arsenal’s 22-match unbeaten run in all competitions and exposed the flaws in Emery’s defence.

Making the situation worse for Emery is a growing defensive injury list.

Sead Kolasinac was a late withdrawal at Southampton due to tightness in a thigh muscle, while Hector Bellerin limped off with a calf problem.

Rob Holding is a long-term absentee and Shkodran Mustafi is battling to shake off a hamstring injury.

“It’s true we need to improve and concede less chances to the opposition,” Emery said.

“We are scoring a lot but we are also conceding a lot, it’s more than we want to be doing.”