Manchester City closed to within two points of Premier League leaders Liverpool thanks to Sergio Aguero's hat-trick in a 3-1 win over Arsenal on Sunday. 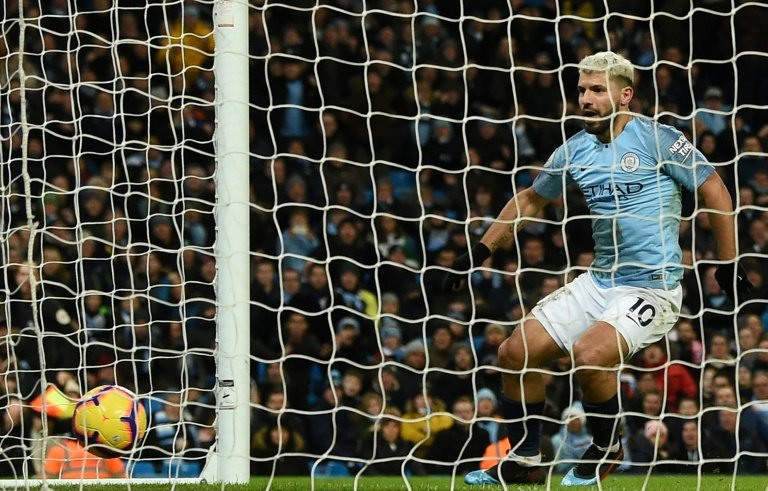 For the second time in a week, Aguero scored inside the first minute to give City the perfect start.

However, just like in a shock defeat at Newcastle on Tuesday, the champions failed to press home their advantage as Laurent Koscielny profited from some slack defending to head home an equaliser just 10 minutes later.

Pep Guardiola’s men were knocked out of their stride for most of the remainder of the first half, but retook the lead in style just a minute before the break when Ilkay Gundogan’s delightful lofted pass teed up Raheem Sterling to cross for Aguero to tap home.

The same two players combined for the Argentine to secure his 10th Premier League hat-trick in controversial fashion as the ball came back off Aguero’s arm before rolling over the line just after the hour mark.

A sixth consecutive away league game without a win sees Arsenal slip down to sixth behind Manchester United, who were 1-0 victors at Leicester earlier on Sunday, and three points adrift of fourth-placed Chelsea in the battle for Champions League football next season.

Aguero has now scored seven times in as many games in 2019 to underline his importance to City’s quest for silverware on four fronts.

The 30-year-old capped a flying start from the hosts by steering home an unstoppable header past Bernd Leno just 51 seconds in after Alex Iwobi was caught in possession by Aymeric Laporte.

Moments later the ball was in the Arsenal net again, but this time Laporte was rightly flagged offside.

City also led early on in defeats by Crystal Palace and Leicester in December and Koscielny’s equaliser shifted the mood and momentum of the game as the home side feared the same fate may further damage their title challenge.

Instead, one brilliant move swung the outcome back in their favour. Sterling played a one-two with Gundogan before volleying a magnificent, first-time centre across the face of the net for the unmarked Aguero to turn in at the far post.

In contrast, the second half was a stroll and City should have more than just the one goal to show for their dominance.

Sterling was again the architect with a darting run into the area which left the Arsenal defence in tatters before he reached the by-line and crossed for the sliding Aguero to steer the ball in via his arm.

Kevin De Bruyne, Bernardo Silva and Aguero again peppered Leno with powerful shots that the German kept out to maintain some respectability for Arsenal.

But that is all they had to show for another sorry away performance that leaves their chances of avoiding a third straight season in the Europa League fading.