Jurgen Klopp has seen Liverpool's title ambitions given a major boost from the most unlikely source ahead of Sunday's eagerly-awaited Merseyside derby at Everton. 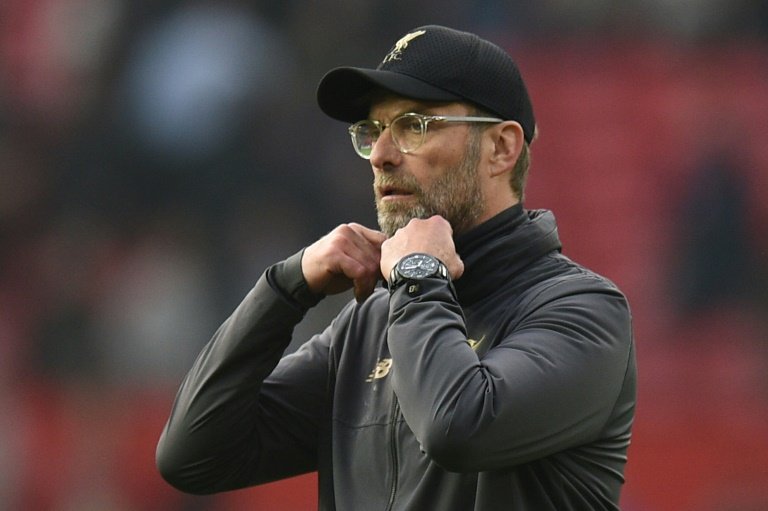 Liverpool manager Jurgen Klopp wants his side to embrace a 'once in a lifetime' opportunity to win the Premier League. AFP/File/Oli SCARFF

The Premier League leaders were under pressure in Wednesday’s home meeting with Watford following an exhilarating run of form from their closest rivals Manchester City.

But a Liverpool side looking for their first league title in 29 years came through that test with flying colours, recording a thumping 5-0 victory that kept them one point clear of second placed Manchester City.

However, while Liverpool’s attacking trio of Mohamed Salah, Sadio Mane and Roberto Firmino have grabbed so many headlines over the past two seasons, it was Klopp’s full-backs who took star billing in that win.

Trent Alexander-Arnold and Andy Robertson provided the assists for all five goals on a raucous Anfield evening, the former actually recording a hat-trick of assists with two crosses for Mane goals and a free-kick that was headed in by Virgil van Dijk.

That was an indication not only of the excellent seasons being put in by both but also the evolution of Liverpool’s play and the game in general.

“If you ask a young boy ‘what’s your favourite position?’ I don’t think a lot of boys will say ‘I want to be a full-back!’

“But football changed. They became much more important. I was a full-back myself for a decent part of my career, it looked completely different to what the boys are doing.

“But at least I know the things to do; you have to be really strong defensively, but on the other side a lot of teams clear the wings for the full backs offensively.

“You have to be able to be open-minded enough and clear enough to see some people in the box with the same shirt. That helps a lot.

“In that game it was exceptional. I don’t think I was ever part of a game where somebody had a hat-trick of assists. It was special.

“Trent wanted the match ball, so he got it! It was really cool. Now let’s try to do something like that again.”

Scotland international Robertson has been a particular revelation in Klopp’s defence this season, at both ends of the field.

For so long, an unheralded hero among Liverpool’s galaxy of big-name stars, the unassuming defender is finally receiving the plaudits his play and attitude deserve.

His link-up play on Wednesday with Divock Origi, in for the injured Firmino, was a key element in the resounding win.

Firmino remains an injury doubt for the short trip to Goodison Park, although Origi would hardly be a bad option given his role in Liverpool’s previous meeting with their local rivals.

He scored the last-minute winner that won the game at Anfield in December, following a disastrous mistake from Everton goalkeeper Jordan Pickford, and sparked a wild celebration from Klopp, who ran onto the pitch to hug his players.

Everton have won just four of their league games since that morale-sapping defeat, a state of affairs that prompted Klopp to describe the derby as representing a “World Cup final” for his rivals.

“I am not sure if it is possible to be more motivated than they were and we were that day. Of course the game was special,” Klopp said of the 1-0 victory over Everton earlier this season.

“We all know my celebration. I will not do it again, but what happened that day was very surprising.

“It was a very special moment, but it’s not the time to put the finger in an open mouth and say we want something like that again.”