Madrid are not the only ones struggling to hit their stride. 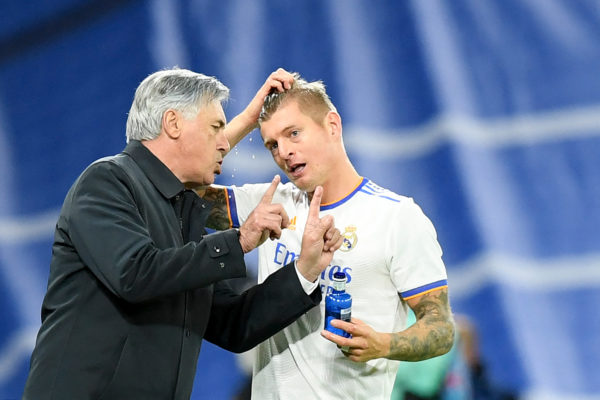 Real Sociedad, Real Madrid, Sevilla or Atletico Madrid could all sit top of La Liga on Monday but none of them yet look much like champions.

Barcelona are ninth and concerned more about finishing in the league’s top four than first.

Xavi Hernandez, the expected replacement for Ronald Koeman as coach, will have a tough task putting the Catalans back into the La Liga title race.

There may be room for encouragement, though, given the stuttering form of those in front of them. Only one of La Liga’s top eight teams are even entering this weekend on the back of a win.

That is Real Madrid and their victory over Shakhtar Donetsk in the Champions League on Wednesday was so laced with lethargy and errors, the home crowd at the Santiago Bernabeu whistled like they were witnessing a defeat.

“I understand it, I know the fans very well, they demand a lot,” said Real Madrid coach Carlo Ancelotti.

“We started well, then we dropped a bit but that can happen and it’s good the fans wake us up with some whistles. It helps us.”

Since an impressive win at Camp Nou in the Clasico last month, Madrid have plateaued.

A goalless draw at home to Osasuna preceded a scrappy win over Elche and the sloppy display against Shakhtar Donetsk. On Saturday, they play sixth-placed Rayo Vallecano.

“After two and a half days rest, you can’t play with the same intensity,” said Ancelotti after Saturday’s win over Elche.

“You have to set up with a medium-block and just try to capitalise on the chances when they come.”

Madrid are not the only ones struggling to hit their stride. Reigning champions Atletico Madrid face Valencia at Mestalla on Sunday after being lucky to escape with only a 2-0 loss to Liverpool at Anfield. Atletico have now managed only a single victory in their last five games.

In four of those, Diego Simeone’s side have conceded two goals or more, raising questions about their traditionally stubborn defence.

Playing three forwards in an attempt to squeeze Luis Suarez, Antoine Griezmann and Joao Felix into the same line-up appears to be coming at a cost.

Real Sociedad play Osasuna on Sunday and are the league leaders but they have drawn two of their last three, including a 1-1 draw at home to Basque rivals Athletic Bilbao last weekend.

A mistake by goalkeeper Alex Remiro allowed Athletic to equalise in the 90th minute.

Sevilla, in third, are perhaps the most dependable yet they lost at home to Lille in the Champions League on Tuesday, a week after being held by Mallorca. Real Betis, in fifth, were thrashed 3-0 by Atletico Madrid last time out.

Betis and Sevilla meet at the Benito Villamarin on Sunday night for the first Seville derby of the season, which sees the return of fans in the fixture for the first time in two years, since they faced off before the pandemic in November 2019.

“We know we have a derby at the weekend, a huge game for the people of Seville, the fans. Everyone is waiting,” said Sevilla defender Diego Carlos.

Barcelona travel to Celta Vigo on Sunday as they look to close a gap to the top that has stretched to nine points already. Xavi could be watching on.

“We know we have to get better,” said Ansu Fati on Tuesday. “We have to keep working.”