Fati pulls out of Spain squad after another injury setback

Fati only returned in September from a serious knee injury, which kept him out for 10 months. 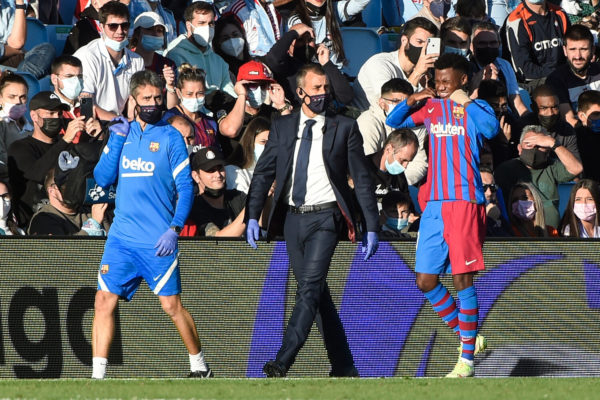 Ansu Fati suffered another injury on Saturday as he was forced off during Barcelona’s La Liga game against Celta Vigo, on the same day Xavi Hernandez was appointed coach.

Fati sustained a hamstring injury, which will be a big concern for Xavi and a blow for the Spanish national team, who confirmed later on Saturday the 19-year-old has withdrawn from the squad.

He has been replaced by Espanyol striker Raul de Tomas.

Fati only returned in September from a serious knee injury, which kept him out for 10 months.

Fati’s recovery has been a huge boost for Barcelona, with the youngster scoring four goals in eight appearances since coming back.

But the forward had to go off at the end of the first half at Balaidos, where he had already opened the scoring with a superb, bending shot into the corner.

His absence would be a blow for Barcelona, who face Benfica on November 23, a game that will be pivotal to their chances of reaching the Champions League knock-out stages.

But while Barca will hope to have Fati back for that match, he will now miss Spain’s World Cup qualifiers over the upcoming international break.

Barcelona defender Eric Garcia was also taken off early against Celta Vigo with a calf problem. Spain coach Luis Enrique will wait until Sunday to decide if he also needs to be replaced.

Spain face Greece in Athens on Thursday before hosting Sweden in Seville three days later, as they bid to secure automatic qualification for the World Cup next year.