Zidane was in Paris at the same time as the Emir Qatar for last month's Champions League final. 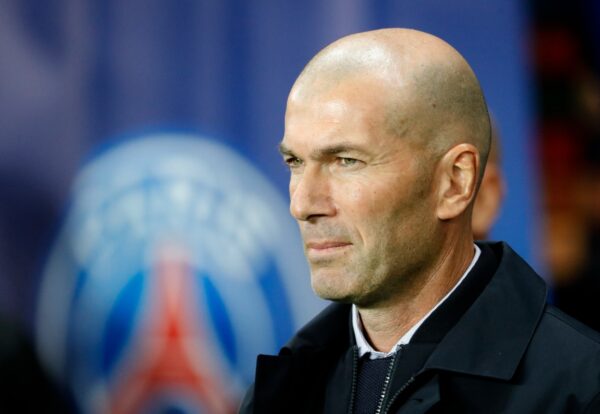 Paris Saint-Germain is close to reaching an agreement with Zidane to become the club's next coach, French Radio stations Europe 1 and RMC Sport announced on Friday. (Thomas SAMSON / AFP)

French champions Paris Saint-Germain are near to reaching an agreement for Zinedine Zidane to replace Mauricio Pochettino as coach, French media reported on Friday.

According to Europe 1 an agreement in principle is in place between the club and 49-year-old Zidane for the former Real Madrid boss to join ahead of the new season.

RMC Sport claims sources at the Parc des Princes have refused to deny the reports.

Later, a PSG source told AFP that such an agreement would have to be considered with caution.

Pochettino has a year left on his contract and led the Qatari-backed side to the Ligue 1 title last term but they were knocked out of the Champions League knock-out stages.

The outfit’s hierarchy have publically stated their desire to win the competition with Zidane having guided the Spanish giants to the title three seasons in a row.

At Madrid, the 1998 World Cup winner with France also lifted La Liga as well as the Copa del Rey twice.

Zidane was in Paris at the same time as the Emir Qatar for last month’s Champions League final at the Stade de France, which was won by Real.

Earlier, PSG announced the arrival of Luis Campos as their football advisor to replace the departed Leonardo.

The Portugese 57-year-old, helped Monaco to the French crown in 2017 as well as Lille four years later and worked alongside Kylian Mbappe on the Mediterranean coast.

One of Campos’ tasks will be player signings with RMC Sport reporting free agent Paul Pogba is waiting for the official arrival of Zidane at PSG to start discussions about joining the side.

“I am delighted to be joining Paris Saint-Germain, which I consider is the most ambitious and exciting club in world football,” Campos said in a PSG statement.

“I believe strongly in and share the vision of the club and I cannot wait to get started to further unleash the great potential of this exceptional club.”