The national team finished 34th in the final table with seven medals (four gold, one silver and two bronze) at the Tokyo Games. 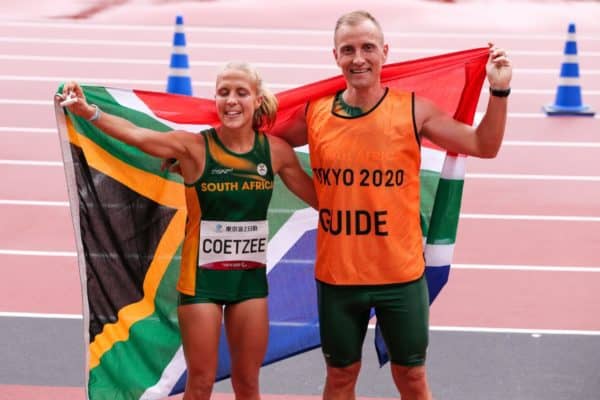 TOKYO, JAPAN - SEPTEMBER 05: Louzanne Coetzee and her guide, Claus Kempen, wins the bronze medal in the women???s marathon T11 and sets a new world record of 03:11:13 during day 12 of the Tokyo 2020 Paralympic Games at the Olympic Stadium on September 05, 2021 in Tokyo, Japan. (Photo by Roger Sedres/Gallo Images)

Visually impaired distance runner Louzanne Coetzee closed out the SA team’s campaign in style by breaking the marathon world record in her class at the Tokyo Paralympic Games on Sunday.

After securing silver in the 1 500m event on the track earlier at the showpiece, Coetzee returned to the podium by grabbing the bronze medal in the women’s T12 marathon race on the road.

She was the first T11 athlete home, completing the 42km contest in third place overall in 3:11:13 with her guide, Claus Kempen.

The 28-year-old athlete from Bloemfontein ripped nearly two minutes off the T11 world record of 3:12:55 which had been set by Natsumi Inouchi of Japan in February last year.

Another Japanese athlete, Misato Michishita, won Sunday’s race in 3:00:50, to the delight of the host nation.

“We were lying fifth for a long time, and I never really thought about needing to move up to third, but then when we were in third I started to think for the first time that it (a medal) could be a reality,” said Coetzee, who was announced as the SA team’s flag bearer for the closing ceremony later on Sunday.

The national team finished 34th in the final table with seven medals (four gold, one silver and two bronze) at the Tokyo Games.

Having travelled to the showpiece with a small 34-member squad, Team SA will return home with their lowest haul of medals since readmission to the Paralympics in 1992.