Young Lloyd Harris clinches a vital singles tie to even things out against Denmark. 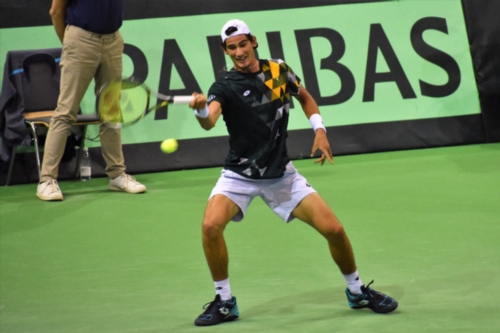 Lloyd Harris kept South Africa’s Davis Cup team in the hunt for promotion on Friday, pulling a point back for the visitors to draw level at 1-1 with Denmark on the opening day of their Euro-Africa Group 2 playoff in Aarhus.

The underdog hosts had got off to a great start, with former Wimbledon doubles champion Frederik Nielsen sweeping aside the SA team’s No 2 player Nik Scholtz in straight sets.

Lanky 20-year-old prospect Harris had a tougher time of it in the second fixture, but he held his nerve to secure a 7-6 6-0 7-5 victory over unfancied Danish No 2 Benjamin Hannestad.

Raven Klaasen and Ruan Roelofse will aim to gain an edge over the home team when they face Nielsen and Thomas Kromann in the doubles rubber on Saturday.

The result will be determined in the return singles on Sunday, with the winning squad earning promotion to Group 1 next year.

The national squad have languished in Group 2 of the international team competition for the last four seasons, after being relegated from the Group 1 division in 2013.