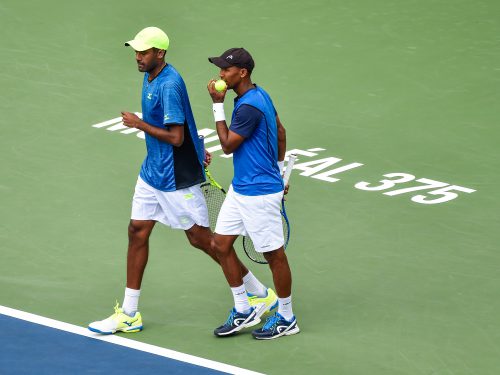 Raven Klaasen and Rajeev Ram are out of the Shanghai Masters. Photo: Minas Panagiotakis/Getty Images/AFP.

South Africa’s run came to an end at the Shanghai Masters on Friday, after doubles specialist Raven Klaasen was eliminated in the quarter-finals.

Klaasen and American partner Rajeev Ram, the No 6 seeds, were outclassed in the opening set by No 4 seeds Jamie Murray of Scotland and Bruno Soares of Brazil.

While they fought back to take the second set to a tiebreak, Klaasen and Ram lost 1-6 6-7, with Murray and Soares progressing to the semifinals.

Klaasen, who won the Shanghai title two years ago, had been aiming for his second Masters trophy of the year after he and Ram lifted the Indian Wells crown in March.

They would have one more chance to secure another Masters crown this year, in Paris at the end of October, ahead of the season-ending ATP Finals in London next month.

Kevin Anderson, the only other SA player competing in Shanghai, was knocked out in the second round of the singles and doubles divisions earlier in the week.

The US Open finalist lost to German player Jan-Lennard Struff before he and Serbian partner Nenad Zimonjic were stopped by Murray and Soares.