Lounging by the poolside at the Riva Surya Hotel in Bangkok after a hearty lunch, guests watch two Muay Thai fighters rhythmically prepare for battle to the backdrop of Thai music. 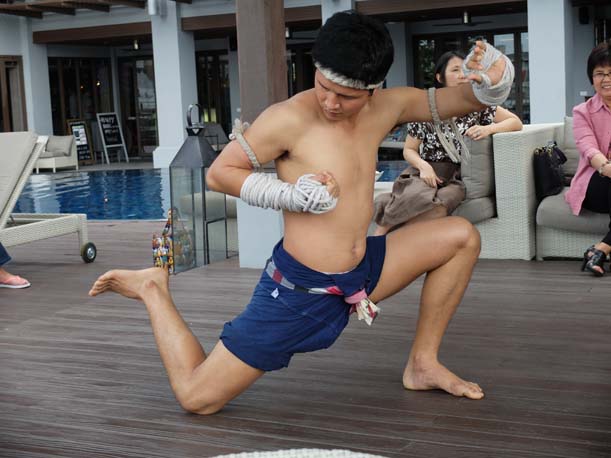 This is the dance before the battle, and although there is movement, the routine is meditative and spiritual. The invited audience waits in anticipation for the duel to start, but the fighters are still in their zones, trying to locate their centre, as it were.

Before the fight commences there is a bit of confusion among the guests as to whether or not this will be a real fight or merely a demonstration. It turns out that it is supposed to be a real fight.

Suddenly the music stops, the fighters bow before each other as a sign of respect and the fight begins. They start off tentatively, trying to size each other up, mostly going in with speculative kicks.

As the fight wears on, one fighter hops on his opponent’s knee with his left foot, elevating himself and knocking the other man in the face with his knee, sending him sprawling to the makeshift canvas.

After recovering, he is desperate to make amends with a couple of quick punch and kick combinations that relegate his acrobatic foe to the floor. The fight grows fiercer by the second with further heavy exchanges again seeing the gymnast sprawled on the floor.

On closer inspection, the fighters seem to be avoiding certain areas on each others’ bodies and are careful not to hurt each other too badly just for the entertainment of tourists.

Then, after another hard hit, the fight comes to an end when one of the fighters decides that enough is enough.

This physical and mental discipline is known as ‘the art of eight limbs’ because it is characterised by the combined use of fists,

It’s associated with good physical preparation that makes a