Queen Supreme heads for Breeders’ Cup in US

De Kock said it would take Queen Supreme four months to get to the UK, where she will remain for a further few weeks before travelling on to the US. 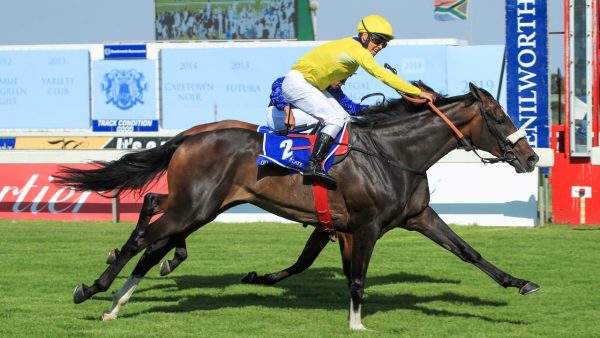 Silver Operator, Queen Supreme, Princess Calla, African Night, Sovereign Spirit, Golden Ducat, Belgarion, Do It Again and Rainbow Bridge made up the order as they swept by the 1,000m mark. Photo: Twitter/@betcoza

Mike de Kock is on the move again – this time he’s off to the prestigious Breeders’ Cup Championships race meeting US with the brilliant race mare Queen Supreme, a dual winner of the Grade 1 Cartier Paddock Stakes at Kenilworth.

The pioneering Randjesfontein trainer has been frustrated in his international raiding adventures in recent years by the notoriously obstructive export protocols for South African horses – notably at the recent Dubai Carnival, where his presence was unusually minimal.

But an invitation from the Breeders’ Cup organisers has got him on the campaign trail, as he announced this week on his website, mikedekockracing.com.

The news item said the connections of Queen Supreme had received an invitation from the Breeders’ Cup organisers following her second win in Cape Town’s flagship event for fillies and mares earlier this year.

The story further revealed that the mare had already entered the quarantine station at Kenilworth to begin her long journey to San Diego and Del Mar racetrack, where the international meeting takes place in the first week of November 2021.

He explained: “After three weeks at the Kenilworth quarantine facility, Queen Supreme will go to Mauritius first. The required spell in quarantine on the island is three months. She will travel on to Abington Place at Newmarket where we will be pre-training her for the Breeders’ Cup before she leaves for San Diego.

“We’ll be cutting it fine with her travels, but there is no easier way. It would have been great if we could ship her straight to Europe, but that’s still not possible and I’m beginning to sound like a stuck record,” added De Kock. “A lot will depend on the groundwork we can do with her in Mauritius.”

De Kock said that Gary Barber, the prominent Hollywood filmmaker and racehorse owner, has bought a share in Queen Supreme and will be added to the partnership which presently consists of himself, Mauritzfontein stud (Jessica Jell), Larry Nestadt, JJ van der Linden and Noeline Malherbe. The horse runs in the well-known Mauritzfontein/Oppenheimer silks of yellow and black.

Barber is a former South African and a good friend of Nestadt. Mikedekockracing.com said he had already enjoyed two winners as an owner on Breeders’ Cup Day and in 2019 won the famous Preakness Stakes – leg 2 of the American Triple Crown – with War Of Will.

Queen Supreme, a five-year-old mare by Exceed and Excel from Call Later (Gone West), ends her racing career in South Africa with seven wins and five places from 14 starts. She has earned R1.59 million in stakes thus far.

A few years ago, Smart Call, also of the Mauritzfontein yellow and black, was also invited to the Breeders’ Cup after winning the Paddock Stakes and the J&B Met of 2016. That mare was trained by Alec Laird, also at Randjesfontein.

Smart Call took the same route that has been mapped out for Queen Supreme but, while training in the UK for her Cup run at California’s Santa Anita track, she suffered an injury that sidelined her for months and the American trip was called off.

Smart Call was then campaigned in England by trainer Sir Michael Stoute, winning a Group 3 race at Newcastle and registering two thirds in the Group 2 Middleton Stakes and a second in the Group 2 York Stakes. The daughter of Ideal World was retired to stud at seven.

De Kock famously raced superstar Horse Chestnut – yet another bearer of the yellow and black – in the US in 2000.

After winning the Group 3 Broward Handicap at Gulfstream Park in Florida, Horse Chestnut’s rocketing career was ended by a training injury.

On another American sojourn, De Kock saddled Sheikh Mohammed bin Khalifa’s Mubtaahij in the Kentucky Derby and the Belmont Stakes – the first and third legs of the US Triple Crown – finishing eighth and a creditable fourth respectively. That venture followed victory in the UAE Derby in Dubai.