SA’s chaotic state of the nation

Sona 2017 marks the start of yet another unpredictable political year. 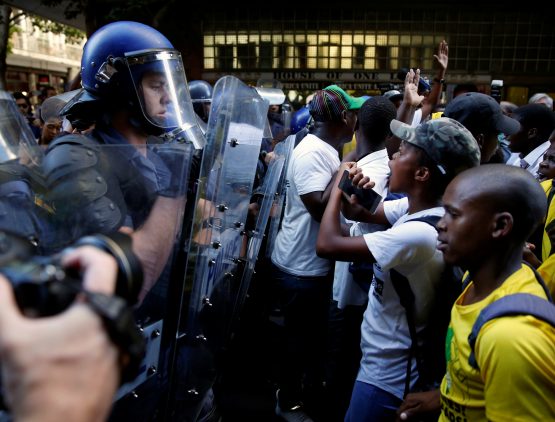 Thursday night’s State of the Nation Address (Sona) circus was an excellent reflection of the state of the nation. South Africa’s political landscape has hit rock bottom, again.

After the first hour it degenerated into another dysfunctional “point-of-order” affair, mostly regarding the president’s unfitness for office. We then saw the familiar events of the Economic Freedom Fighters forcefully ejected from the House.

This was followed by the deployment of the military and the riot police in and around the parliamentary precinct. It was not a pretty sight and most definitely not a symbol of democracy.

It also marks the start of yet another unpredictable political year, which promises to escalate as we approach the ANC’s elective conference in December.

When Zuma eventually took the podium with his trademark “he..he..he..”, he cracked a joke and acted as if the madness did not happen. His message was irrelevant, especially as images of violence in and outside parliament were shown alongside his televised address.

I really don’t understand how a president could merely proceed to read a prepared speech in these circumstances as if nothing happened. He did not even address, mention or refer to the preceding events.

But then again, it was a repeat of Sona 2016 where he was also seemingly more stressed about the numbers in his speech. But sequels are notoriously worse than their predecessors. Sona 2017 was no exception.

It is also indicative of the political turmoil that awaits us in 2017 as the leadership race for the reigns of the ANC hots up. This, unfortunately, also means that economic growth and the improvement of consumer, business and investor confidence will not be on top of the political agenda. This will, of course, remain Pravin Gordhan’s responsibility and after Thursday’s events it is crystal clear that 2017’s economic performance is linked to the length of Gordan’s tenure as finance minister. It is absolutely imperative that he remains in his position until there is more political stability.

As expected, during his address, Zuma focused extensively on accelerated economic emancipation and “radical social economic transformation” to fight increasing inequality and to reduce poverty. This will undoubtedly and rightfully remain the political theme for some time to come. Although most stakeholders would agree that any economic growth must be more inclusive to benefit all South Africans, there is definitely no consensus on how to achieve this.

It is clear that Zuma believes this can be achieved by tougher legislation and regulations to “force” the private sector to comply with this vision. This contradicts a more general view from within the private sector that economic growth is the key to future wealth creation. But this will only become a reality in a more business-friendly climate that would see increased investment and resultant creation of desperately-needed jobs – the spark that will ensure a reduction of unemployment, poverty and inequality.

Of course, the real answer lies somewhere between these diverse views. This solution will only be found in an improved trust relationship between government and the private sector, and a common goal that South Africa is heading towards a better future. Currently, there is no such common goal.

South Africa’s most prosperous economic era came in the 2000s as it prepared to host the soccer World Cup. All stakeholders, government, labour and the private sector worked together to achieve a common goal and this was to host one of the best World Cups ever. Not only did we achieve this, but the country’s economy performed exceptionally well.

As I said before, there is currently no common vision and it partly explains why the country is experiencing the lowest levels of confidence and tolerance ever. The Sona 2017 was an opportunity to provide a common goal or vision. Sadly, it did not. Maybe Sona 2018 will be different. Don’t pack away the popcorn just yet.