Organisation urges ANC MPs to vote with their conscience in no confidence motion.

Business Leadership South Africa (BLSA) on Sunday published advertisements in the major Sunday newspapers appealing to members of the ruling ANC and alliance partners to “exercise their conscience” to stop state capture.

The organisation says state capture centres mostly around President Jacob Zuma “and one family”, an apparent reference to the Gupta family that has been accused of appointing cabinet ministers and featured prominently in the Public Protector’s State of Capture report.

The BLSA appeal comes in the build-up to a vote of no confidence to be tabled by opposition parties in parliament. The United Democratic Movement  (UDM) has approached the Constitutional Court in an effort to ensure that the vote will be done by secret ballot. Opposition parties are hoping that ANC members will support the vote to get rid of Zuma, but believe it will only happen if they are allowed to cast their votes in secret.

Appeals to such members of parliament to vote according to their conscience, rather than along party lines, have been growing.

Here is the full text of the BLSA advertisement:

URGENT CALL TO ALL OUR ELECTED LEADERS TO STOP STATE CAPTURE

South Africa is in crisis:

All of these developments can be traced back to state capture centred mainly around the President and one family, aimed at the illegitimate acquisition of South Africa’s natural and financial assets.

Business Leadership South Africa (BLSA) does not accept this. South Africans, including the business community, should not stand by and allow this to become the “new normal”. We stand for a constitutional democracy, rule of law, respect for the independence of state institutions, an effective state, zero tolerance for corruption in both the private and public sectors, and a growing and inclusive economy that works for all.

South Africa’s business sector is under constant attack despite providing employment for 13.5 million or 86% of the country’s working population and the bulk of the direct and indirect taxes that pay the salaries of 2.2 million government employees.

Despite this we have no desire, intention or mandate to involve ourselves in party politics. We respect the Constitution and the means by which political leadership is determined. These are matters for the citizens of South Africa and their elected representatives.

However, we regard the present situation as the political and economic low point of our young democracy. We know that without decisive action by leaders in every sphere of South African life our future is bleak.

As corporate leaders BLSA makes an urgent appeal to all our elected representatives in parliament, and the ruling party and alliance partners in particular, to exercise their conscience in taking whatever immediate steps are needed to reverse corruption and state capture and to restore confidence in our country’s leadership, our economy and the future of South Africa.

BLSA is an independent association whose members are South Africa’s largest businesses and major multinational companies. B:SA seeks to promote the interests of business and an inclusive growing economy that works for all South Africans in an effective constitutional state. 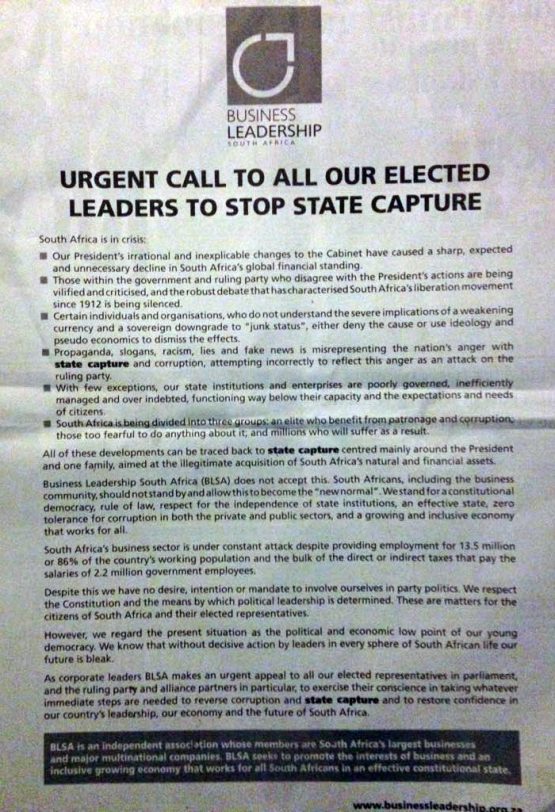