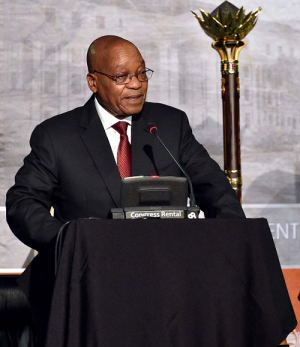 RYK VAN NIEKERK:  The 27th World Economic Forum on Africa gets under way in Durban tomorrow. It is an event where more than 1 000 businesses, civil society and government leaders from more than 100 countries meet to talk about the problems of our continent and the world we live in.

On the line is Siki Mgabadeli. She is in Durban. Siki, welcome to your own show. What is the significance of the meeting?

SIKI MGABADELI:  Good evening, Ryk. I think sometimes we forget the significant historical perspective that the World Economic Forum on Africa has for South Africa. In fact, you might remember that the annual meeting in Davos provided a platform for the very first meeting outside South Africa between Nelson Mandela, President FW de Klerk and Chief Mangosuthu Buthelezi back in 1992, just ahead of our historic democratic election in 1994.

Since then, the forum has been doing what they call working to bring together stakeholders, to bring them to talk about crucial inclusive and sustainable progress for the continent. So what they are trying to do – they are saying that they want to bring those leaders together to do things that they can only do if there is expanded public-private cooperation. That’s why the meeting remains relevant.

RYK VAN NIEKERK:  What are the main themes of this event?

So all the conversations this year really are about that, but at the same time looking at the things that we think about which are quite urgent – the fact that we sit with such a high youth-unemployment rate. What are we going to do with these young people who are not prepared for the future, for future jobs that don’t exist today? They are not trained to do the technological jobs that are going to be required for the future. How are we going to bring them into the Fourth Industrial Revolution?

RYK VAN NIEKERK:  President Zuma will attend. Are there other country leaders that will also attend?

SIKI MGABADELI:  Absolutely. President Zuma we understand is going to be doing a walk-through tomorrow morning to welcome everybody who will here, and we’ll see if we can squeeze in a question which we’ll bring to you as well.

RYK VAN NIEKERK:  And key business leaders – sometimes they are the highlight of events like these. Are there prominent business people going to be there?

SIKI MGABADELI:  Absolutely. Most of the South African CEOs. This is part of their playground, really, if you think about it, given that South Africa is one of the biggest foreign direct investors into the rest of the continent. All the big CEOs generally attend the African meeting of the World Economic Forum. They are here mostly to do meetings, but also to participate in some of the conversations, just to get a sense of where things are going.

As you know, the past two years have been very difficult, Ryk, for the continent, with commodity prices falling. South Africa and Nigeria, being the biggest economies on the continent, have had the biggest trouble dealing and coping with the reversal of those prices, with Nigeria facing currency depreciation, South Africa facing junk status and downgrades, and so on. So it’s going to be interesting to see how they pair up with the other faster-growing economies like Ethiopia, Kenya and Rwanda.