Eskom has work to do to plug its funding gap

The utility is relying heavily on new sources of funding.

The state utility reported results on Wednesday that revealed the company increased revenue at a time when local electricity sales continued to fall and amid rumours that the it was three months away from running out of money.

Revenue increased by 8% to R177 billion on the back of higher electricity prices, but sales in its primary market (South Africa) fell by 1% to 199 000 Gigawatt hours. Overall, Eskom’s sales volumes declined by 0.2%. Eskom now sells less electricity than it did in 2007, the year load-shedding began.

Eskom then and now 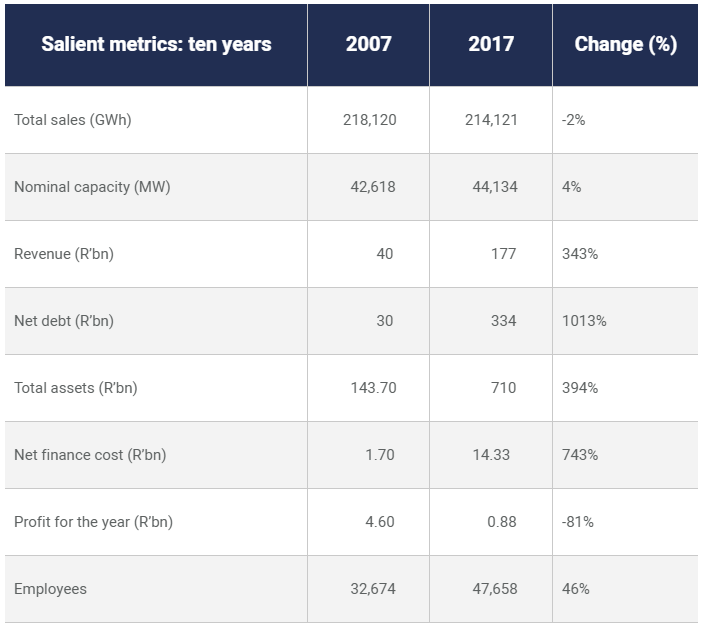 Eskom generated earnings before interest, tax, depreciation and amortisation (Ebitda) of R38 billion, an increase of 14%. But the increase in its cost of funding was eye popping; the net finance cost rose by 82% to R14 billion, which meant that after depreciation was accounted for, the group made net profit for the year of R888 million (an 83% decline).

From a cash flow perspective things looked better – the company generated R45 billion from operating activities, but the scale and pace of its capital build meant that its cash position decreased by R8 billion to R20 billion by the end of March, meaning the company is a net borrower, and will be for the foreseeable future.

Questions over Eskom’s ability to meet its appetite for cash have been hampered by its governance issues, which have sent local bond investors fleeing for the hills. Eskom has not conducted a bond auction domestically since 2014, instead being pushed into using funding from development finance institutions and export credit agencies. Both of these sources are less transparent than bond auctions as they are agreements conducted bilaterally without any of the terms or pricing being publicly revealed.

Eskom stated that 53% of the R78 billion it needs to raise for the current financial year to end March 2018 has been secured. No funding from the Public Investment Corporation (PIC) via a private placement has been budgeted for, a story on its own (see “domestic bond private placement” with the purple arrow in graphic below). It seems that the country’s biggest pool of capital has now deemed Eskom off limits. (Attempts to reach the PIC at the time of publication were not successful).

For the balance of the R32 billion Eskom needs for this year, it aims to tap R24 billion from sources it didn’t use last year, and an additional R6.3 billion from domestic bonds (red arrows). 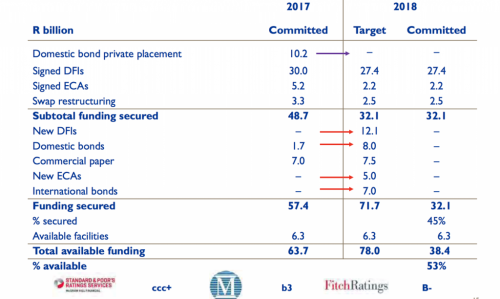 Eskom is going to have to do a lot of convincing if it wants the R8 billion from domestic bonds. Transnet – another errant child in the portfolio of state-owned companies – has not returned to the bond market since its poor showing in June, where it raised a fraction of the R200 million it required. “The recent actions by minister [Lynne] Brown and the board to take action against Koko and Molefe are encouraging, but they are by no means enough to restore confidence in the utility,” said a bond manager familiar with discussions and who did not want to be identified due to the sensitive nature of the relationship. “They need to get their act together. The onus is now on them to show the market they are serious about getting this company to run properly.”

International bond investors – earmarked for R7 billion by the utility – are even more cautious. Due to Eskom’s junk status, the institutions that would have borrowed money will be replaced by more “high yield” specialists, and that means the utility is going to have to invest time in cultivating new relationships with portfolio managers and firms that specialise in these types of investments. And finally, Eskom wants R17 billion from new relationships with development finance institutions and export credit agencies.

At the very least, we can assume the utility’s cost of finance is going to rise given the ongoing risks, assuming it gets all the funding it requires. But what if it doesn’t? Over to you, oh mighty taxpayer.