Upton back at Group Five The share price of construction group Group Five recovered somewhat on Monday after tumbling almost 5% in morning trade on the back of a notice that the group expects to report a loss per share of at least 375c in the year ended February 28.

By late afternoon the share price recovered from R18.81 to R19.10, which represents a drop of 3.34% on the day. The recovery followed the outcome of the special shareholder meeting held to elect a new board. 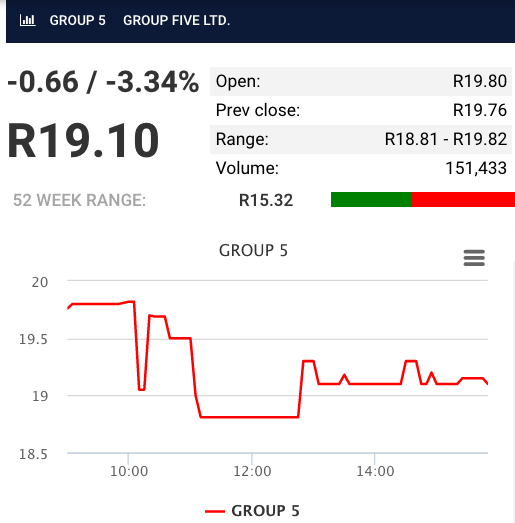 Allan Gray earlier called for the special shareholder meeting, saying it lost confidence in the board.

The fund manager told Moneyweb it could not get proper answers about the reasons behind the departure of former Group Five CEO Eric Vemer in February. Vemer’s departure sparked a cascade of resignation of key individuals.

The previous board indicated last month that it has lost the support of a material shareholder and indicated that it would step down on the date of the shareholder meeting.

At the time the chairperson Philisiwe Mthethwa expressed her concern “about the approach Allan Gray has taken to date, including a demand for its directors to be nominated as a block. We also question the underlying reasons for this call for a board reconstitution”.

Mthethwa said the reconstitution of the board should not be driven by a single shareholder and announced that the PIC and Mazi Capital would also nominate board candidates.

All the nominees of all three shareholders were eventually elected.

According to Reuters, after the election Mthethwa called on the newly-appointed board to adhere to corporate governance and act in the best interest of the company and all its stakeholders “and not only focus on short-term shareholder returns.

“I believe that the management team in place will steer the business back to profitability,” she said.

According to reports the board tension revolved around the possible sale of the group’s valuable investment and concessions business. This business operates at higher margins that the traditional construction and engineering business. Its annuity income also provides a welcome buffer against the volatility of the construction industry.

The outgoing board was allegedly not in favour of the inclusion of Upton on the board and emphasised the fact that the collusion the industry confessed to before the Competition Tribunal occurred partly under his watch.

Upton however led Group Five as a whistleblower in the matter and as a result saved the group from having to pay costly penalties.