Developers have a surplus of high-end apartments on their hands as buyers retreat.

It was only four years ago that Africa’s richest square mile became the destination of choice for SA’s major financial firms, sparking the largest commercial property development boom of the decade.

Corporates including Investec, Nedbank, RMB and the JSE were the early movers into Sandton during the 2000s, and several firms have since followed suit.

Sasol, Webber Wentzel, Alexander Forbes, EY, and Bowman Gilfillan have anchored their main offices in Sandton in recent years while Discovery and Old Mutual Emerging Markets will soon pile into the area.

Property developers believe the catalyst for Sandton was the advent of rapid rail system Gautrain in 2010, which unleashed billions of rands in office, retail and residential property developments.

Over the last three years, developers launched high-rise luxury apartments, piggy-backing on the relocation of corporates into the area that would, in theory, create demand from buyers who desired to live closer to work.

However, the story is different today.

High-end developers are not reaping rewards, as sales of apartments in Sandton have slowed amid falling demand from prospective buyers and investors. “Things have changed dramatically. Savvy investors are sitting on their hands at the moment,” said Kent Gush, MD of Kent Gush Properties.

Figures from property company Lightstone confirm this, showing 4 552 sectional title units sold in Sandton during 2016 and only 1 793 so far this year.

Gush said developers are still concluding apartment sales, but not to the scale seen three years ago. “The strength of the luxury apartment market then was being driven by investors who made very good returns on investments into luxury apartments in Sandton.”

Gush is involved in four apartment developments in Sandton: Katherine & West, which is located diagonally across from the Gautrain station; Metropolis on Park, located near the Mushroom Farm Park; Central Square in Morningside; and Embassy Towers, nestled a block away from Sandton City.

Katherine & West, which boasts two- and three-bedroom apartments ranging in price from R9.5 million to R26 million, is sold out. Gush said another three apartment schemes, priced between R1.9 million and R40 million, are more than 70% sold.

Another problem for high-end developers is faltering off-plan apartment sales.

Marc Wachsberger, ‎MD at The Capital Hotel Group, which manages hotel and luxury apartment buildings The Capital 20 West and Empire in Sandton, said off-plan apartment sales have “ground to a halt”. “Sellers have to adjust their pricing of apartments to the new reality. Developers who change the price to reflect the difficult market will likely be able to sell.”

Wachsberger said buyers still have an appetite for two- or three-bedroom apartment units that are priced below R3 million.

Slower sales are not only unique to Sandton, as developers are also left squeezed in the neighbouring Melrose Arch.

Amdec Property Development has broken ground on a luxury apartment development at Melrose Arch called One on Whiteley, with one- and two-bedroom apartments that are sold off-plan from R2.2 million to R6 million. One on Whiteley, which is expected to be completed in 2018, is already 70% sold. Nicholas Stopforth, MD at Amdec, said monthly sales at One on Whitely have been slower in recent months. 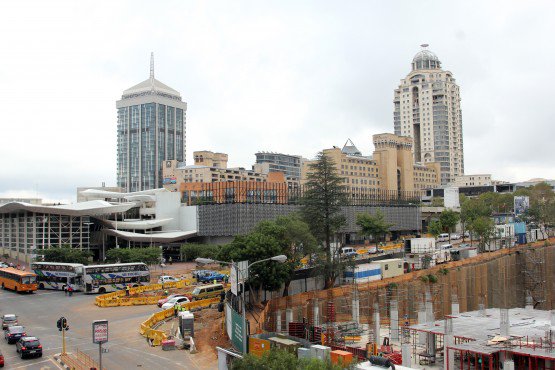 Cape Town, however, appears to be bucking the Johannesburg slump, with property developers reporting higher demand and sky-high apartment valuations.

When Amdec launched 170 one- and two-bedroom apartments at its mixed-use development called the Yacht Club near the V&A Waterfront in September 2015, the average asking price was R50 000/square metre. Stopforth said by July 2016, Amdec had sold a top apartment for R75 000/square metre.

The Yacht Club, which will be completed in 2018, is already sold out. Stopforth said the on-going “semigration” trend of property buyers from Johannesburg and Durban relocating to Cape Town is fueling the acceleration in apartment valuations.

There are still pockets of growth in Gauteng – one of them – the trendy node of Rosebank. In fact, the area is increasingly expected to overtake neighbouring Sandton as the most desirable live, work and play node.

Just like Sandton, the presence of the Gautrain station since 2011 is viewed to be the catalyst for the area’s rejuvenation. The relocation of corporates into Rosebank including BP, Coca-Cola, Sappi, Standard Bank and others is expected to have a positive-spinoff for the area’s residential market.

More than 500 apartments have been delivered in Rosebank over the last four years. Property developer Renprop has added three apartment developments in the area, among them, the recently completed and sold out The Vantage, which is located on Bath Avenue.

See below how apartment valuations compare in Sandton and Rosebank 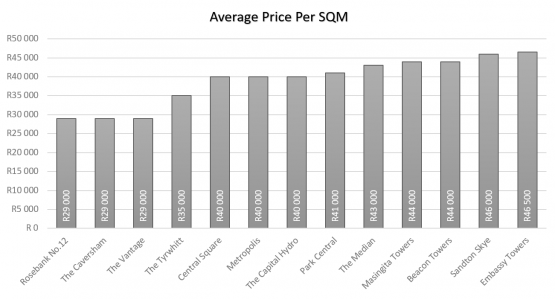 Renprop has two other pending apartment developments in Rosebank: The Median, opposite The Zone@Rosebank, and The Tyrwhitt, on the corner of Bath and Tyrwhitt Avenue. The Tyrwhitt and The Vantage are in partnership with property development company Grapnel Property Group.

Renecle said 88 of the 120 apartments at The Median have already been sold while 140 of the 200 apartments at The Tyrwhitt have been sold. “Rosebank is achieving seven to eight sales per month. There has definitely been a slowdown but not to the extent of Sandton.”

Asked what makes Rosebank the exception, Renecle said the node is desirable for being in walking distance to private and public schools, the Gautrain, entertainment spots and areas of work.

On Sandton’s prospects, Gush said: “Sandton will have its day in the sun again. At the moment, it’s undervalued compared with the prices achieved in Cape Town.”