Value funds having a wild ride

Positive returns are once again elusive.

Over the past few years, investors in South African value funds have needed strong stomachs. The managers of these funds have struggled to find any kind of consistent returns.

While 2013 was a fairly good year for most of them, from mid-2014 to the end of 2015, the value style went through a period of significant underperformance. Value funds therefore recorded some large negative returns over these two years, even though the JSE essentially moved sideways.

Then came the start of 2016, and a rebound in commodity stocks that sent many value funds soaring. Many value managers carried overweight positions in counters like Glencore, Anglo American, Kumba and Impala Platinum, which massively outperformed the market last year.

So far in 2017, however, value has once again fallen out of favour. Many managers have given up some of last year’s gains as commodity stocks have enjoyed more mixed fortunes, and other value opportunities have remained depressed.

The table below illustrates how five local value funds have performed year by year since 2013: All five of these funds also sit in the lowest decile of performance for South African equity funds over the last 12 months. With the exception of the Investec Value Fund, their three- and five-year performance is also less than stellar, as the table below shows: 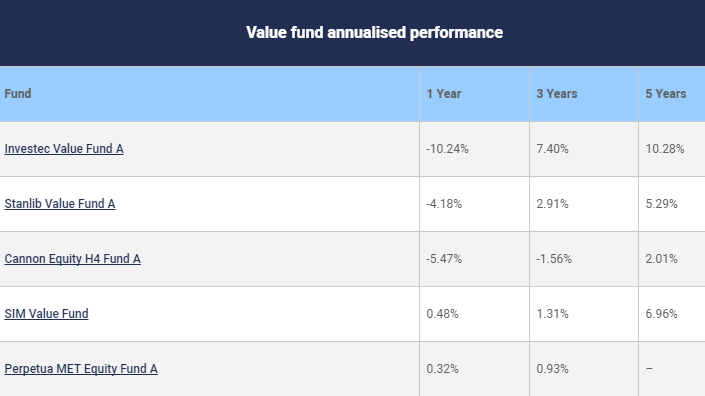 What is interesting about these funds, however, is that their portfolios are starting to look very different to each other. They are clearly seeing value in very different parts of the market.

The Investec Value Fund is still heavily weighted towards mining counters. At the end of August just under 65% of its portfolio was held in basic materials stocks, with particularly big positions in Impala Platinum, Anglo American, and AngloGold Ashanti.

The Stanlib Value Fund also favours resources, with 39% of its portfolio in this part of the market. It is, however, also heavily exposed to consumer goods businesses, which really sets it apart from all the other funds listed above. It gives the sector a weighting of 21%, while none of the others hold more than 10% of their assets in these companies.

In contrast to these two, the SIM Value Fund has less than 15% of its assets in basic materials stocks. Its biggest position is offshore, to which it assigns 22% of its portfolio. Locally, it is most exposed to the financials sector.

The Cannon Equity Fund is also most exposed to financials, at 29% of its portfolio. Its most interesting holdings in this regard are in Sasfin Holdings and Peregrine.

Cannon has however been upping its resources exposure in the last few months. Specifically it has been buying Anglo American and Glencore, which are now the two biggest positions in the fund.

Perpetua sits in something of a middle ground, with relatively large exposures to both financials and basic materials, at 27% and 21% of its portfolio respectively. Its largest holding is however MTN.

To some extent these disparities show how value managers are seeing much broader potential in the current market than they have for some time. There is a much wider opportunity set for them.

So far this year, however, this value has not unlocked. The question is how much longer investors will have to wait.