This major announcement flies in the face of the National Treasury’s role in keeping a lid on government spending, wasteful expenditure and finding sustainable ways to grow the economy. 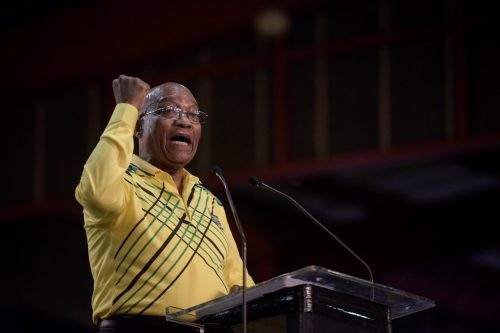 This plan will be effective from 2018 for students in their first year of study at public universities.

Zuma’s plan is in stark contrast to the recommendations by a commission of inquiry into free higher education and training – headed by retired judge Jonathan Heher – that free higher education would put a massive strain to the fiscus, which already faces a revenue shortfall of R50.8 billion.

In making his free higher education plan possible, Zuma amended the definition of poor and working-class students, which will now refer to “currently enrolled at Technical Vocational Education and Training (TVET) Colleges or university students from South African households with a combined annual income of up to R350 000” by the 2018 academic year.

“From 2018 onwards, eligible South African children of the unemployed, social grant recipients, South Africans earning below a minimum wage, domestic workers, farm workers, mine workers and entry-level civil servants such as teachers, nurses, policemen, municipal workers, security guards, refuse collectors and informal traders amongst others will now access public universities and TVET colleges for free through grants provided by their government, he said.

Zuma’s major announcement comes at the start of the ANC’s 54th elective conference in Nasrec, Johannesburg on Saturday, where his successor will be elected by the governing party. Critics will likely raise eyebrows on the timing of the announcement as the conference is key for SA’s economic and political trajectory.

In justifying his plan, Zuma said free-higher education for poor students is in line with ANC policies. Zuma is yet to consult with Minister of Higher Education and Training Hlengiwe Mkhize and Minister of Finance Malusi Gigaba on his education plan.

Zuma’s free education policy was estimated to cost the fiscus R40 billion for a single year and put the National Treasury’s budgeting process under significant strain.

Zuma’s free higher education plan, which is yet to be supported by Mkhize and Gigaba, would undermine the Treasury’s role in keeping a lid on government spending, wasteful expenditure and finding sustainable ways to grow the economy. The government will increase its expenditure on higher education and training from 0.68% to 1% of the GDP over the next five years. As a result of this, there will be no tuition fee increases for students from households earning up to R600 000 a year during the 2018 academic year, said Zuma.

Market watchers said funding Zuma’s education plan would require tax hikes or drastic measures including cutting government’s wasteful expenditure or reducing the cabinet size, which has bloated since Zuma was elected as president in 2009.

In his report that was released in November, Judge Heher recommended that all undergraduate and postgraduate student fees should be funded through a model in which commercial banks would issue government-guaranteed loans to students that are payable upon their graduation. This funding model – referred to as the “income contingent loan system” or ICL – would see students repay their loans after graduating and reaching a specified level of income. If students fail to reach the required income threshold after graduating in order to repay the loan, then the government bears the secondary liability of the loan. Zuma rejected this recommendation.

In another major concession, Zuma announced that National Student Financial Aid Scheme loans will be converted to 100% grants “effectively immediately” for further years of study.

Zuma supported the Heher inquiry’s recommendation that TVET colleges are eligible for financial support from the government as this sector is facing severe financial pressure.

Fully subsidised free education and training will be extended to current and future poor students at all public TVET colleagues from 2018. This funding – which will cover the full cost of study including tuition fees, prescribed study material, meals, accommodation and transport – will be phased-in over a period of five years. Students enrolled at public TVET Colleges will be funded through grants and not loans.