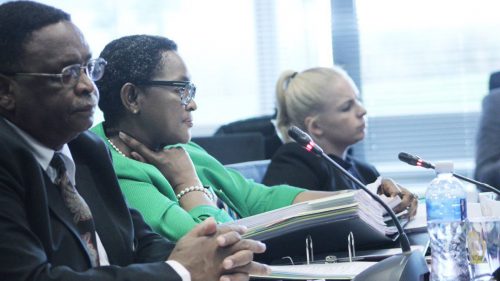 Axed South African Social Security Agency (Sassa) CEO Thokozani Magwaza has lifted the lid on how Social Development Minister Bathabile Dlamini runs the social grants agency “like her shop” and how she is often protected by bodyguards from answering tough questions asked by senior Sassa officials.

Magwaza – who testified on Friday at the Sassa inquiry – said Dlamini would throw her weight by bypassing the agency’s senior officials in making key social grants decisions, disturbing operations at the last minute and often threatened to fire officials if her instructions were not followed.

“The problem is that the minister [Dlamini] was running Sassa like her shop and started disturbing the smooth running of the organisation‚” Magwaza told the inquiry.

The mandate of the inquiry – presided over by Judge Bernard Ngoepe – is to probe Dlamini’s role in the Sassa fiasco that nearly jeopardised the livelihoods of 17 million social grant beneficiaries and whether she should personally pay for legal costs as the matter reached the Constructional Court.

At the inquiry, which started on Monday, Dlamini rejected the suggestion that she controlled Sassa’s day-to-day operations and excluded senior officials – including Magwaza – in key decision-making processes.

In fact, Dlamini has argued that Sassa officials did not tell her for six months that the agency would miss the April 1, 2017 deadline set to take over social grant payments from incumbent distributor Cash Paymaster Services (CPS).

However, when Magwaza was cross-examined by his advocate Richard Solomon SC, a different version of events emerged – one where Dlamini allegedly used her power to shut down officials who held different views to hers.

Magwaza cited an incident when he was on his way to a meeting that would be attended by Sassa’s executive committee in February 2017, at Emperors Palace in Gauteng.

As an acting CEO of Sassa at the time, Magwaza said he was not invited to the meeting about the agency’s work streams, a function that had been established by Dlamini to investigate Sassa’s capacity to take over social grant payments from CPS.

He was alerted by a Sassa chief of staff on his way to the meeting that state security agents were clearing Emperors Palace to prepare for Dlamini’s arrival. “I found it strange and asked why there was state security at the meeting. Sassa meetings are not secret,” he said.

At the meeting, Magwaza asked Dlamini to discuss the agenda with Sassa officials but would not speak until the agency’s project leader and her key ally Zodwa Mvulane arrived.

“The minister said ‘I’m not starting anything until Ms Mvulane gives her presentation.” Then “all hell broke loose” after Mvulane’s presentation.

“The minister started saying many things to me in front of my colleagues… she said I didn’t like the work streams and I’m not giving them a chance to do their job… She said ‘I was not doing my job and should start focusing on the day-to-day running of Sassa’. She told me to stop bothering the work streams as they report directly to her and that I had nothing to do with them.”

Dlamini then stormed out of the meeting with her bodyguards and was not willing to engage Magwaza when he asked her to return to the meeting to discuss her concerns. Her bodyguards stood up to protect her and “surrounded her as if I were attacking her”, he said.

This is the same manner in which Dlamini handled the Sassa crisis, where she ignored tough questions from media and MPs in Parliament. She even failed to appear in Parliament when summoned.

Magwaza’s appointment as Sassa CEO was confirmed in November 2016 and was abruptly fired in July 2017 for cancelling the controversial work streams, which led to the breakdown in his relationship with Dlamini.

The work streams were controversial because they failed to make progress on Sassa’s mandate to take over social grants from CPS and guzzled more than R30 million, which the National Treasury recorded as irregular expenditure.

Open letter to Cyril Ramaphosa: ‘The worst is about to happen’