Those with holiday homes or rental properties will be negatively affected.

The City of Cape Town’s draft rates policy in a very sneaky way excludes holiday homes and residential rental units from being categorised as residential property for the purposes of paying property rates.

As a result owners will be required to pay more than double the rates than they would have if the property were their primary home.

This has been hidden in the city’s rates policy since 2014/15, but it seems few investors are aware of it, says RatesWatch director of valuations Ben Espach.

Espach questions how the city is able to distinguish between primary and secondary homes and apply the policy consistently to all property owners.

Moneyweb is aware of one owner who lives abroad and has been billed for property rates on his home in Cape Town at the non-residential rate. He is appealing the matter and has appointed an advocate to represent him. No date has yet been set for the hearing.

The draft policy is contained in a 31-page Annexure to the city’s draft budget. Stakeholders have until May 4 to submit comment on the documents.

Nowhere in the 31-page document does the city spell out the categorisation of properties for rating purposes.

It does not make it clear that secondary homes would be rated at a much higher rate than primary homes.

It is only when one reads three definitions contained in the draft policy together, that the real intention becomes clear, says Espach. 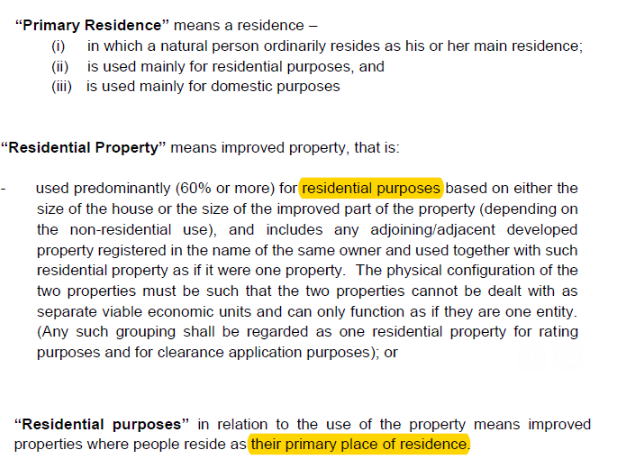 Espach says read together, these boil down to the same definition that was contained in the Municipal Property Rates Amendment Bill, 2011.

Due to huge opposition from stakeholders this exclusion was removed before the amendments were enacted in 2015.

In the current draft policy non-residential property is defined as “all other properties other than those defined as residential” and including vacant land.

These properties are rated at a ratio of 2:1 to the rate of residential properties.

The definition provides that this category “could be further refined in terms of commercial and industrial properties” in the rates policy, but it is quiet about secondary homes and residential rental properties.

He criticises the city for not communicating clearly which property categories they provide for and says punitive property rates could negatively impact on the viability of investments and ultimately on the value of such property in Cape Town.