Which calls into question the integrity of findings.

New evidence has come to light which shows that the country’s previous Auditor-General, Shauket Fakie, was misled by individuals he sought representations from when conducting the independent review into the allegations of share price manipulation involving companies in the Resilient Group.

The independent review was launched in part due to serious allegations of share price manipulation and irregular trading in the shares of companies in the Resilient stable. These allegations were made and described by a number of investment managers and brokers including 36ONE Asset Management, Arqaam Capital, Navigare Securities and Mergence Investment Managers.

As part of his mandate, Fakie was tasked with investigating the validity and accuracy of such claims in respect of the trading of shares of companies in the Resilient stable. These included Resilient, Fortress, Nepi-Rockcastle and Greenbay.

During the course of an investigation, Moneyweb came across the curious case of one Hendrik Oberholzer, the sole director and shareholder of four “K” companies that exclusively traded in the shares of the Resilient stable and which owned over a billion rands’ worth of stock in them as at the end of January 2018.

Upon request, Oberholzer provided us with the shareholder registers for the four companies (see below) – which confirmed that he had been both the sole director and shareholder of the companies in question since December 2 2014.

Shareholder registers for each of the four “K” companies 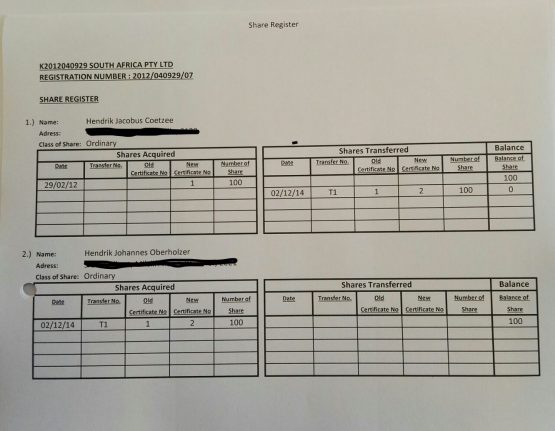 But during the course of communicating his findings of the review, Fakie initially contradicted Oberholzer and claimed that Roque Hafner, a friend and one-time business associate of Des de Beer (the founder of Resilient), was in fact the owner of the “K” companies. Fakie later corrected his statement, and confirmed that Oberholzer was in fact the sole shareholder of all four companies but that Hafner had – through entities in his control – lent Oberholzer the money to buy the shares.

Moneyweb can now reveal that according to a copy of the 2016 audited financial statements for Sentola Limited – a company incorporated in Cyprus and controlled by Hafner’s family trusts – that Hafner is the majority shareholder of all four “K” companies. But he is not the only shareholder, because the audited financials show that Sentola is only a 76% shareholder in the companies.

This directly contradicts what Oberholzer told Moneyweb, and Fakie. In addition to the shareholder registers he provided, in communication with Moneyweb on April 13 this year he stated: “I did not tell Fakie that Roque Hafner’s family trust was the ultimate beneficial owners of the “K” companies, and in fact you were aware that I am the sole shareholder, as you were furnished with a copy of the share register.”

But in response to Moneyweb’s questions following the evidence he was presented with yesterday, he stated: “I have looked into the question of the shareholding in the “K” companies, and the position is as follows: Sentola owned 74% of the shares  in the “K” companies up to the end of 2016,  whereafter it was taken over by me, so I have correctly confirmed that I am currently the sole shareholder. The error lies in the share register sent to you, which was only drawn up after your request, and erroneously omitted to reflect Sentola as a former shareholder. No dividends or loans were ever paid/received from the “K” companies to/from Sentola.”

Oberholzer declined to answer questions on who owned the other 26% of the shares in each of the four companies.

Fakie confirmed that this was not what he had been told: “We have not looked at the audited financial statements of Sentola. We were told by both Hafner and Oberholzer that Oberholzer is the sole director and shareholder of four “K” companies.”

These developments will call into question the integrity of the independent review. Was Fakie just taking everyone’s word for it? What else has not been substantiated or checked? Is it ever worth taking an investigation instituted by a company into itself seriously, especially given the fact that this is Resilient’s third review into its own conduct?

Fakie has previously indicated the report of the independent review would not be made public, which makes it difficult to tell just how robust its findings were.