How to determine whether a CEO’s remuneration is sustainable

Much can be seen from the link between pay and the company’s triple-bottom-line performance. Jack Welch increased the value of General Electric (GE) by over 4 000% during his time at the helm of the company. One of his key goals while chairman and CEO between 1981 and 2001 was to maximise total shareholder return.

This seeks to maximise the benefit received by shareholders, which drives up demand for the shares and hence increases the value of the shares. Executing this strategy led to Welch being named Manager of the Century by Fortune Magazine in 1999.

Fast forward to 2009, and Welch was quoted as saying that “shareholder value is the dumbest idea in the world.” This may seem paradoxical given the strategy he pursued while leading GE, but Welch did have his reasons.

He immediately added that “Shareholder value is a result, not a strategy. Your main constituencies are your employees, your customers and your products.” (Financial Times).

In the mid-1990s the idea of pursuing the triple bottom line (TBL) – Profit, People and Planet; or Economic, Social and Environment – began to gain traction. This framework was designed so that a larger group of stakeholders would be included rather than the limited stakeholders, using traditional financial metrics, which formed the focus of the business.

By giving each of the TBL stakeholders equal attention, businesses gear themselves towards sustainability from a much broader perspective than simply economic. The importance of an organisations’ employees as well as their environmental impact has been viewed with increasing appreciation in recent years, resulting in even more emphasis being put on the concept of targeting the triple bottom line.

The wage gap compares the pay of the CEO to that of the median general staff employee. This calculation has often led to criticism of the CEO’s pay relative to the rest of the organisation. However, the structure of the organisation can often lead to a distortion of the median employee pay level – for example, mines will have higher portion of workers at lower grades than IT companies.

In response to the need for an alternative way of analysing CEO pay against organisational performance, 21st Century created a Sustainable Remuneration Index which tracks the position of JSE-listed CEOs’ performance under the pillars of profit, people and planet.

Statistical analysis was used to determine the most significant sub-indices used to create the index for each pillar (profit, people and planet). An equal weight was assigned to each pillar’s index. These indices are then combined into a single figure and percentile ranked (from lowest to highest) against the percentile rank of each company’s CEO’s total remuneration or total earnings. In other words, each company’s percentile rank of their performance and CEO pay forms a set of coordinates that are plotted on a graph. Figure 1 shows the scatter plot of these coordinates (pay and performance point) for each company in the sample. 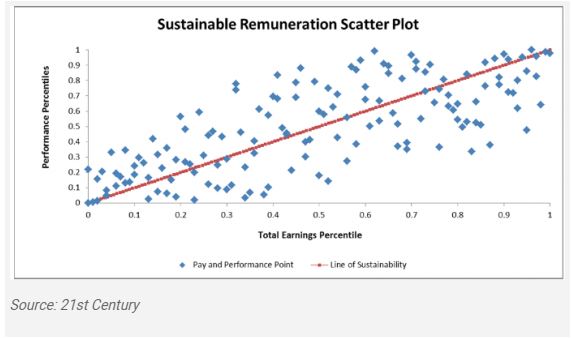 The further away from the line of sustainability, the less sustainable the relationship between pay and performance. An example of this is that a high-performing CEO who is paid low may be lured away by another business. Conversely, an over-paid, under-performing CEO may not have his remuneration approved by the shareholders at their annual general meeting.

By comparing themselves against the sample group, this index provides an alternative way for an organisation to determine whether its CEO’s remuneration is in line with their performance under the pillars of the triple bottom line. Tracking their position relative to the line of sustainability will give companies guidance regarding their current state as well as what they need to do in future to improve.

From a societal point of view, as the scatter plot in Figure 1 becomes more concentrated around the Line of Sustainability, so the macroeconomic environment as a whole will improve, with the link between pay and performance becoming stronger. This will not only raise companies’ awareness of pursuing the Triple Bottom Line but will also reign in unwarranted, excessive CEO pay if it exists.