There isn’t a single multi-asset high equity fund in South Africa that has given investors even a 10% annualised return over the past five years. 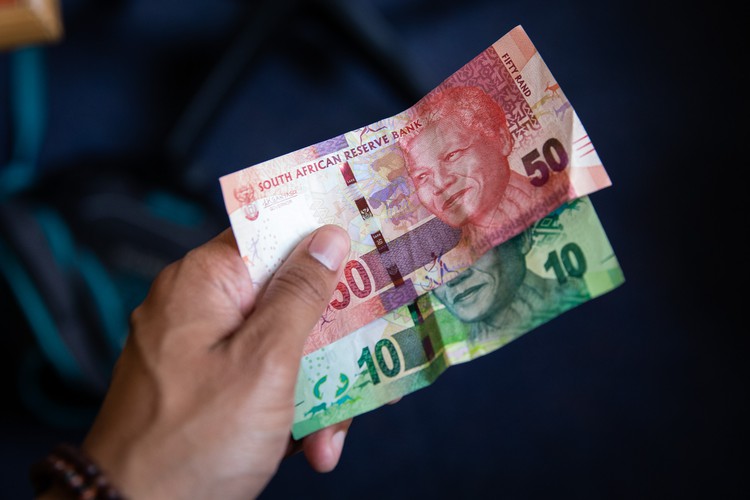 Given the current low return environment, a bank offering 15.5% interest on a fixed term product sounds incredibly appealing. After all, there isn’t a single multi-asset high equity fund in South Africa that has given investors even a 10% annualised return over the past five years.

So it’s not surprising that Finbond’s ‘guaranteed fixed term interest bearing note’ that offers an ‘effective rate’ of 15.5% over five years has caught the attention of many investors. The minimum investment of R1 million might put it beyond the reach of a lot of people, but it still sounds like a tantalising offering, particularly for anyone looking for somewhere to put a large pot of retirement savings.

As the below advert shows, however, Finbond has actually linked two different rates to the product. The 15.5% is obviously being promoted given its larger positioning, but there is also the rate of 11.5%, which it calls ‘simple interest’. 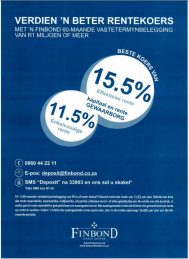 The difference is significant, and investors should appreciate what it is.

The 15.5% is promoted as an ‘effective rate’. This is a confusing term that a number of banks have been criticised for using for a number of years now. Most recently, Absa’s 13% fixed deposit rate attracted a lot of scrutiny.

The reason that this ‘effective rate’ is problematic is that it is calculated using a bit of reverse engineering. This is illustrated in the table below.

The product is actually paying an interest rate of 11.5%. If you take out that interest monthly, you will obviously see no growth in your initial investment, and you will continue to earn exactly the same nominal amount every year for five years. This is shown in the first two columns.

If, however, you elect to reinvest that interest, you start to see the effect of compounding. You will earn interest on your interest and therefore begin to see the nominal amount of interest grow each year. This is shown in the second two columns. 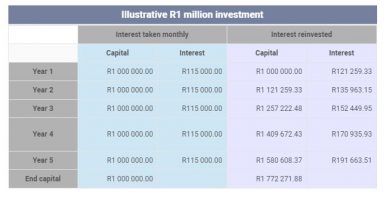 What Finbond has done to get to the 15.5% ‘effective rate’ is to calculate the total growth on compounded investment amount (shown at the bottom of the third column). It has then divided it by five and compared it against the initial capital amount and expressed this as a percentage. This is shown below.

This is not, however, interest. It is not even an internal rate of return. Hendrik Bester, a retired actuary and former CEO of Sanlam Asset Management, argues that it is “a totally nonsensical calculation” and “no recognised measure of return”.

Crucially, there is no other type of investment that uses this kind of measurement. In other words, 15.5% is not comparable to anything else.

“What they are offering is 11.5% per annum, compounded monthly in arrears, which yields an effective rate of 12.1%,” Bester argues. “They calculate the maturity value correctly, but they portray the 11.5% compound interest as if it is in fact effectively 15.5%. The terminology is used out of context and is purposefully designed to mislead investors.”

Finbond CEO Dr Willem van Aardt doesn’t see it this way. In a response to Moneyweb he argues that:

“Our advertisements for the interest-bearing note makes it abundantly clear that the rate is 11.5% calculated on a simple interest basis, and in the event that the client elects to have interest capitalised over the term of the product and paid out only upon maturity thereof, then the interest compounds monthly, which means it is added to the capital balance of the note, and the effective rate earned works out to just under 15.5%. Both the simple and effective interest rate is 100% transparently disclosed in all our advertisements and documentation (unlike some other banks that only advertise(d) the effective rate).”

Van Aardt did not, however, answer questions as to why, if Finbond acknowledged that the 11.5% rate is the actual interest rate, the 15.5% is advertised at all. After all, 11.5% is still an extremely attractive return. So why does the bank feel the need to promote a different, and inherently confusing, rate as well?

He also did not respond to Moneyweb’s request to explain why Finbond would use this kind of calculation when other banks have been consistently criticised for similar practices. Nor did he answer whether Finbond is not creating an unfair comparison with other products.

On the whole, investors should be wary of anything that is sold as an ‘effective rate’. This is not a standard measure of return and is inevitably going to make comparisons with other products very difficult, or even impossible. The ‘simple rate’ is always the true measure of interest being earned, and that is where investors should focus. 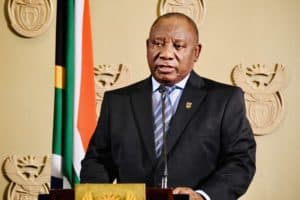 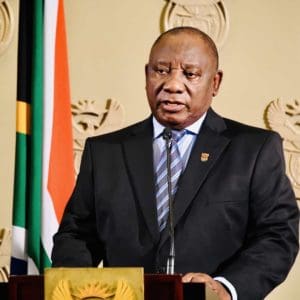 Ramaphosa tries to raise R1.2 trillion in investment
1 month ago
1 month ago

Ramaphosa tries to raise R1.2 trillion in investment
1 month ago
1 month ago