The big exporters of capital are generally rich countries with a high standard of living – so why is South Africa in this mix?

South Africa attracts far less fixed investment as a percentage of GDP than any other emerging market.

According to data from the UN Conference on Trade and Development (Unctad) for 2017, South Africa was the third biggest exporter of capital as a percentage of GDP in the world.

Foreign direct investment (FDI) is an investment made by a firm or individual located in one country into business interests in another. Generally, FDI takes place when an investor establishes foreign business operations or acquires foreign business assets, such as a controlling interest in a foreign company. FDI is distinguished from portfolio investments in which an investor merely purchases equity in foreign-based companies.

FDI is a vital part of overall fixed investment (investments into actual land, buildings, machines and inventory). It is a long-term investment and a good indicator of confidence in a developing country.

Fixed investment has had the closest relationship with job creation in the formal sector in South Africa since 1967. In larger developing countries, FDI makes up well over 35% of investment stock.

Only the tax havens of Luxembourg and the Netherlands exported more net FDI as a percentage of GDP than South Africa.

Even Zimbabwe has more net FDI than South Africa – mainly by South African firms – but that story we leave for another day.

Emerging markets have an average net foreign fixed investment stock of 12% of GDP, while developed markets are the main exporters of fixed investment. The world is of course neutral, but suffice to say that generally big exporters of capital are rich countries with a high standard of living that are looking to diversify their investments, export their technology and so on.

Net foreign direct investment stock as a percentage of GDP 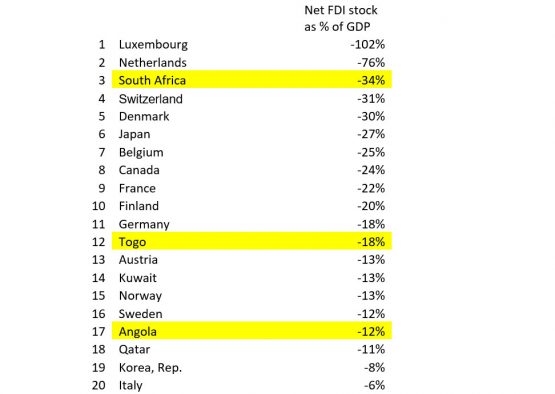 Source: Unctad for fixed investment data and World Bank for GDP data. (Note on emerging markets: Libya is in a civil war, Angola is seen as corrupt and run by one family, and Togo has little in the form of human or property rights and is ruled by a dictator.)

This from a country that had the highest unemployment rate in the world in 2017.

FDI is one of the most important factors in creating jobs in many countries and governments fall over themselves to attract it.

The above is not a quick survey or a spreadsheet by a think tank. It represents real money flows and investments into productive investment. The labour numbers come from the International Labour Organisation. These are hard numbers from the real economy.

Fixed investment flows from developed countries to emerging markets where economies attract capital in the form of fixed investment due to higher growth and expectations of growth.

Using the average emerging market as a measure (average is taken as 12% of GDP as calculated), SA should have had R2.2 trillion in extra fixed investments by the end of 2017.

Measured as a percentage of South Africa’s total fixed investment stock of R11.2 trillion, this would imply about 20% more capital.

Assuming that the capital and labour ratio stays the same, this would have meant about 3.1 million more jobs. The net foreign investment stock is hard data collected by Unctad as well as the South African Reserve Bank. Other international bodies show similar declines and comparable trends.

However, this is private sector fixed investment we are talking about. The R2.2 trillion would have been about 32% more at private-sector level. Using the same capital/labour ratio assumption, the number of jobs in the private sector would have been 4.5 million more. That means SA would have halved the unemployment numbers from close to 10 million to about five million. (State-owned enterprises are also investing outside of SA, which is also a source of concern as others see this too.)

But as SA had a high point of 24% of GDP, the job-creation numbers could have been higher. Also, remember that much of the foreign direct investment came about due to headquarters shifting from Johannesburg or Cape Town to London or Amsterdam.

Anglo American, SA Breweries/SABMiller, Investec, and Steinhoff are still some of the biggest investors in SA, but these multinationals were ‘built’ in South Africa.

There is nothing wrong with companies looking for new opportunities – it’s just that ever since the days of sanctions, South Africa has not had a great track record in attracting foreign firms (other than in the subsidised motor manufacturing industry).

Adding the old South African companies that became foreign companies into the mix means that the ‘missing’ net foreign fixed investment stock is closer to R4 trillion today. If South Africa attracted more FDI and kept its homegrown firms here, the country may have had an unemployment rate about a third of today’s number!

Next time someone asks why only three of every 10 adults have jobs in the formal sector, ask what their country did to scare investment and jobs away. In total, only four out of 10 adults are employed in this country – including domestic workers and the informal sector.

The result of the outflow of FDI is the 10 million unemployed who are the real victims of this tragedy.

Our general economic welfare in the form of less income, higher crime, and massive unemployment can in large part be blamed on this.

This should be the only election issue – jobs, and why we have 10 million people in the unemployment line.

Ramaphosa: Employment stimulus to stave off job crisis
4 days ago
4 days ago

Ramaphosa: Employment stimulus to stave off job crisis
4 days ago
4 days ago