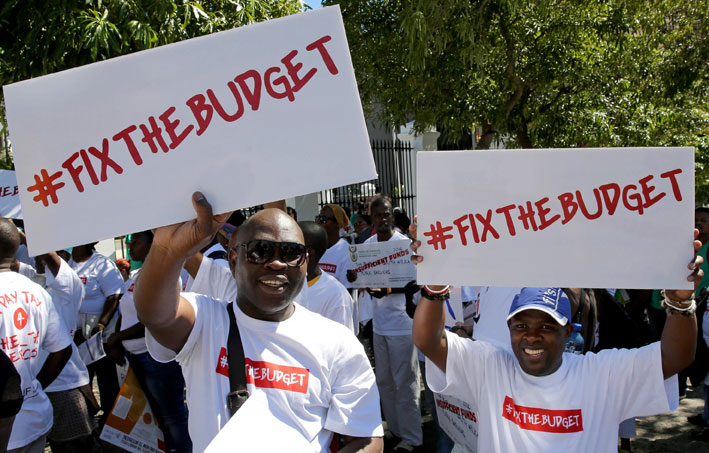 FILE PICTURE: Activists demonstrate in front of Parliament in Cape Town on Tuesday, 25 February 2014 ahead of the budget address to be delivered by Finance Minister Pravin Gordhan tomorrow. Picture: Nardus Engelbrecht/SAPA

That Egypt has leapfrogged South Africa to become the second-largest economy on the continent, after Nigeria, is sobering but hardly surprising, say economists.

“Were it not for the rand’s slump, South Africa would not have surrendered its second place during 2015,” said KPMG.

“PPP numbers can be used to say which economy is bigger or smaller than the other based on purchasing power. In this case, it is Nigeria at the top followed by Egypt and South Africa during 2015,” KPMG economist Christie Viljoen said.

“It’s not so much about the rise of Egypt but rather the decline of South Africa,” said Investment Solutions chief economist Lesiba Mothata.

He said the shrinking mining and agriculture sectors, as well as the beleaguered manufacturing sector, had contributed to South Africa’s economic decline.

Viljoen added that South Africa’s challenges were largely political in nature. “Changes in Cabinet, the fallout from insufficient investment in electricity-generating capacity, problems with profitability at factories and mines due to labour costs and low business confidence all have a notable political factor to them.”

Political turmoil has also weighed on Egypt’s economy, with real GDP growth still below the levels reached before the Arab Spring protests in January 2011.