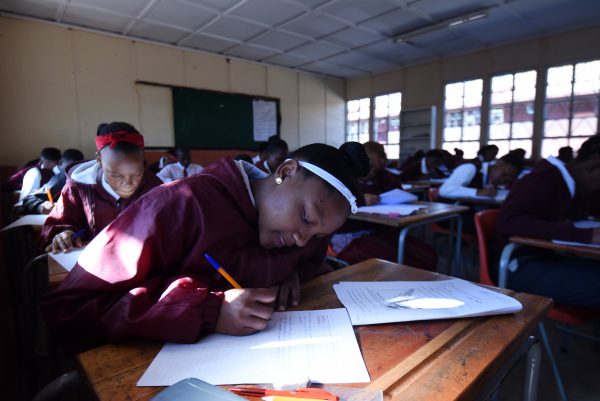 Noordgesig High School children write examinations during the visit by the officegurubrand ambassador and Mrs south Africa Finalist, Rebekah Krossynski to the school in Soweto, Johannesburg, 2 June 2016, during the hand over of 100 chairs which were sourced nad Clip boards for the 23 days examination period inorder to help each learner fulfil their education potential. It was a combined effort of theoffice guru.co.za and Batlile from The Citizen to make this to happen. Picture: Nigel Sibanda

A Zimbabwean, Heathfield Primary’s grade 6 maths teacher did not feel welcomed at the Cape-based school and his class’s poor results – in the 40s – reflected his struggle to adapt. After the school’s principal became more nurturing and supportive of this teacher, by 2015 the maths results had shot up into the high 80s.

This is just one of dozens of stories illustrating the impact that Partners for Possibility (PfP) is having on South Africa’s under-resourced schools by establishing partnerships between business leaders and school principals.

Over the course of one year, the business leader and school principal complete a tailored leadership course together and receive professional coaching. The partners custom design a school improvement plan, while also sharing ideas with other similar partnerships, and engage the schools’ respective communities to become actively involved in executing the plan.

Founded in 2010, PfP is the flagship programme of Symphonia for South Africa, a non-profit organisation with a vision to achieve quality education for all children in South Africa by 2025.

According to Symphonia, just 5 000 of South Africa’s 25 000 government schools are “doing very well”.

Research conducted by Symphonia finds that these high-quality government schools have two things in common: a principal who is equipped for their task and a community that supports the school.

PfP thus brings together the country’s under-resourced schools – which often find themselves burdened by extremely difficult socio-economic circumstances, such as poverty and unemployment – with its world-class corporate sector.

Some 345 partnerships have been formed since the project started in February 2011, with data available for 288 of these, as the rest were formed less than a year ago.

Hartnack did an in-depth evaluation of a representative sample of 20 schools that have completed the programme across nine different areas, such as leadership impact on the principal and school governing body or management team, as well as community/parent, education and infrastructure spin-offs.

Hartnack’s findings overwhelmingly suggest that PfP is having significantly positive impacts on the way schools are run and the outcomes they achieve.

Fifteen of the schools achieved an overall score of eight and above out of ten, while all 20 of the principals interviewed by Hartnack found PfP to be beneficial.

“Educational impacts don’t happen overnight, but even so, more than 70% said there were positive changes in the educational environment while 30% reported an improvement in results,” said Hartnack.

For example, Zonkizizwe Secondary School in Katlehong, Gauteng achieved a 93% matric pass rate in 2015 with 58 bachelor passes (i.e. university exemptions) out of 118.

More than half the schools evaluated completely reworked their vision and mission, drawing up strategic plans and forming committees to execute on these.

Schools also notably improved engagement with parents and the community, so much so that members of the community now guard Iphuteng Primary in Alexandra after hours and do not play loud music during school hours.

Yeoville Boys Primary in Johannesburg, which serves a large community of immigrants from the rest of Africa, has made arrangements with the Department of Home Affairs, banks and other agencies to come to the school regularly and assist parents with obtaining necessary documents.

It is not only principals who gained from the PfP year, but business leaders too, mostly “because they got to see first-hand the challenges that under-resourced schools and principals faced, and to move out of their comfort zones and get involved”, the report finds.

One senior Vodacom executive, for example, was at first not comfortable travelling to Alexandra when her principal relocated to a new school. After some encouragement she visited the school and learnt to “break social boundaries”, facing the realities of township education and its challenges, the report finds.

Some business leaders even made changes in their own companies and management teams, following input from the principals they partnered with, particularly around racial and cultural issues.

The vast majority of these 20 partnerships have continued even after the programme was completed, with more than half of these partnerships considered “very active”.

Hartnack described the support of school principals as a “catalytic investment” for businesses to make in the education system.

“This is an example of the National Development Plan in action,” said Dr Louise van Rhyn, founder of Symphonia.

She said that scaling the programme is a challenge and called on more business leaders to become partners.

Festive season: Here's when Covid and load shedding will be 'on duty'
9 hours ago
9 hours ago

Festive season: Here's when Covid and load shedding will be 'on duty'
9 hours ago
9 hours ago