Standard Bank’s interim earnings growth outperformed that of its competitors even as currency headwinds came to bear. 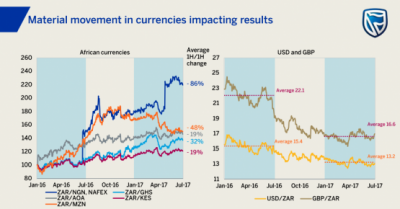 Still, its growth in headline earnings trumped that of JSE-listed rivals. Over the same period, competitor Barclays Africa grew headline earnings by 7% to R7.77 billion. Nedbank’s headline earnings slipped by 2.9% to R5.3 billion as its pan-African unit, Ecobank Transnational, incurred losses (FirstRand’s financial year ended in June, it is due to report results on September 8).

For Standard Bank – Africa’s second largest lender by market value – the rest of Africa proved lucrative, contributing 29% to the group’s banking headline earnings of R11 billion. The bank’s performance across the 19 African countries outside of South Africa in which it operates was partly supported by higher interest rates, which boosted endowment income, said Adrian Cloete, portfolio manager at PSG Wealth.

The group’s Nigerian business also appeared more resilient compared to its peers amid recessionary conditions, further complicated by the devaluation of the naira and foreign currency shortages. Sim Tshabalala, chief executive of Standard Bank, attributed this to the universal nature of its Nigerian bank and timing early provisions.

According to Renier de Bruyn, investment analyst at Sanlam Private Wealth, good cost management was a highlight of the group’s results. In constant currency terms, total income grew by 8% to R49.34 billion on the back of an 8% increase in net interest income (NII) and a 4% increase in non-interest revenue. Operating expenses fell by 2% to R27.77 billion. That Standard Bank was able to grow revenue more than expenses saw it achieve a positive Jaws ratio of 1%. “Both Nedbank and Barclays Africa were unable to contain cost growth below weak revenue growth in their recent results,” he said. “Head count and number of branches reduced slightly as the bank continues to transition towards digital channels. After a number of years of double-digit growth in IT function spend, it declined by 3% over the period despite a 30% increase in amortisation charges resulting from the large investment to replace the core banking platform over the last few years.”

Tshabalala told Moneyweb that such a result is sustainable even as a deteriorating consumer environment in its home market, South Africa, suggests that revenue growth may slow. “The revenue generation capability of Standard Bank is very strong and the fastest growing parts of the group are in the operations on the continent, outside of South Africa. The interesting statistic is that the South African (SBSA) headline earnings were up 18%. The ones outside South Africa were up 19% but if you take account of constant currency, they were up close to 50%.”

A turnaround in subsidiary Liberty’s performance would certainly boost earnings. During the period under review, the insurance group’s headline earnings fell by 30% to R1.3 billion as Individual Arrangements, comprising its local retail business, and Stanlib fared poorly. Still, Standard Bank’s interim results were largely unaffected by Liberty’s poor performance. Cloete expressed surprise at this, saying he expected Liberty to be a drag on its parent company’s earnings but instead its earnings were flattered by accounting. IFRS accounting measures related to the listing of the Liberty Two Degrees Reit as well as Standard Bank shares held for the benefit of Liberty policyholders, saw Liberty’s IFRS earnings attributable to the group come relatively flat at R882 million from R886 million previously.

It declared an interim dividend of R4, which is an 18% increase from R3.40 paid out in the prior year.