But, competitive pressure in the category is only just starting to build. 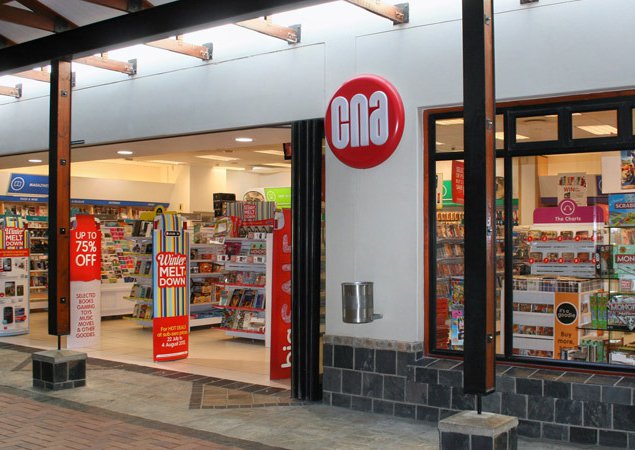 Retailer Edcon has finalised its plans for the turnaround of its struggling CNA division and the group says it has “just completed” a “test and learn” phase, which includes a new business model and a renewed focus on core categories.

In 2015, the retailer replaced its mammoth flagship Sandton City store with a River Island one (since shuttered) and moved to a far smaller location next door. The transition – especially watching it happen over a period of months – was symbolic.

No doubt fuelled by the broader group’s addiction to cellular revenue, CNA doubled down on technology, with prime front-of-store space dedicated almost exclusively to laptops, printers and mobile phones. The technology strategy proved costly on multiple fronts: shrinkage and security costs soared, sales in core categories suffered and margins shrank. It also stumbled into some fast-moving consumer goods (FMCG) categories, with expanding ranges of snacks and refreshments as well as a weird foray into selling cigarettes.

Happily, it has realised its mistakes and, as part of its turnaround plan, CNA will “reduce [the] range and depth of lower margin periphery categories including digital, entertainment and FMCG”.

Edcon says “CNA aims to re-establish itself as the dominant stationery retailer through an expanded stationery range that includes a greater selection of fun and trendy products. This will be associated with a revised store layout to emphasise these changes”.

In other words, stationery will move back to the front of the store. And, given the new focus on “fun and trendy” ranges, expect it to look a little more like Cotton On’s Typo. Already, there are certain items and ranges in store that would not look out of place in a Typo store. With the perfect science of hindsight, the division of Australian retail giant Cotton On is what CNA could’ve (and should’ve) become all along. Localised ranges will go hand in hand with this renewed focus on its core categories and here, too, pilots are underway. So, don’t expect a store in Carletonville to carry the exact same stock as one in Sandton City, for example. So-called “terminally unprofitable stores” have been shut and it will “pilot new store formats and locations”. Also on the list, it says, is an investigation of “franchise options”.

CNA remains a decent-sized business. It has a store footprint of 185 stores (versus a tad over 200 in April 2010) and in the 2017 financial year, generated retail sales of R1.9 billion. And its profitable, albeit barely. 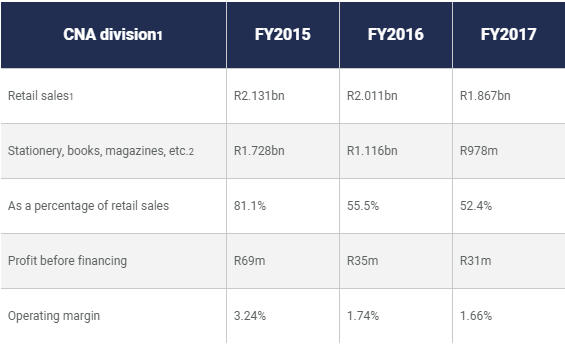 A small portion of this category/product line will be sold in the discount division (i.e. books at Jet during back-to-school seasons.1 This division includes 11 Samsung retail stores it operates on behalf of the electronics maker.

The turnaround of CNA is far less complicated than that of Edgars, for instance, and we should see signs of it in the FY2018 numbers. But, while the strategy and category refinement is in place, the market is a very different one to that which CNA basically ceded to competitors years ago.

In the core commodity/back-to-school stationery segment, supermarket and general merchandise retailers (like Game, for instance) have grown their share. Typo is a formidable player and effectively defined the gifting and stationery-as-fashion category.

This has been noticed by others in the market, with mrphome (neé Mr Price Home) quietly launching a rather extensive ‘Stationery & Gifts’ range (basically a clone of much of what Typo stocks). This will likely remain a tiny part of the larger 150+ store mrphome business (and certainly of the group), but the point is that CNA’s problems are not going to be fixed by simply introducing some trendy pencil cases and notebooks with slogans like “You got this” on them.

From an internal leadership point of view, CNA like much of the “Specialty” division has been a hot potato and in near-permanent restructuring. Garth Napier (now running Pep’s Africa business) lasted nine months as CEO of the Edcon division. His successor, Andy Jury, was in the role for exactly one year. From this year, Boardmans and Red Square have been moved from ‘Specialty’ to the Edgars division while Edgars Active has been moved to the Jet division (both of these changes are long overdue and make a ton of sense). 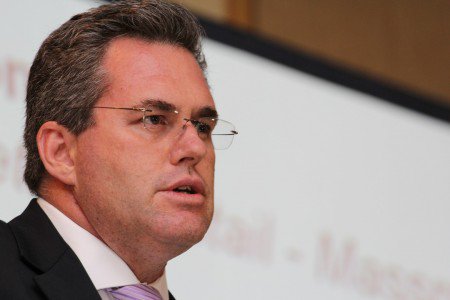 Grant Pattison (pictured above), chief operating officer and CEO-designate (he’ll take the top job in February 2018) now has direct responsibility for “CNA, Cellular and Strategy”. What a way to get started….