Although the Public Investment Corporation (PIC) has nurtured black-owned asset management firms by giving them funds to manage over many years, there’s still sufficient scope for it to drive transformation, says 27four Investment Managers.

According to an annual BEEconomics survey produced by 27four, black-owned asset management firms now control R416 billion of SA’s investing and savings industry. This represents 9% of the total R4.6 trillion of savings and investments managed by the private sector as at June 30 2017. 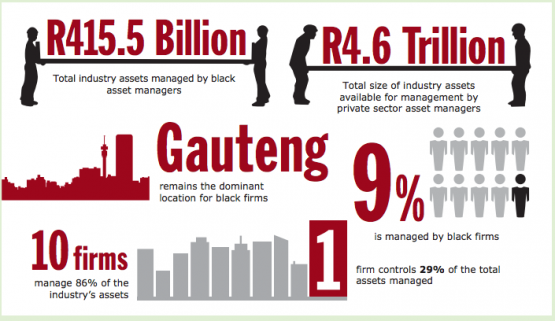 Arguably the PIC has a responsibility to give smaller black fund managers a hand due to its sheer size. With R1.8 trillion worth of assets under management on behalf of the Government Employees Pension Fund and other government funds, it is the largest money manager in the country

The 27four survey shows that 16% of the PIC’s assets are managed by private asset managers and the remaining 84% is managed in-house.

Claire Rentzke, 27four’s head of manager research, says there is a lot the PIC could do to increase the level of its assets that are managed by private asset managers, which would boost the number of black-owned firms. “Only 16% of their assets are outsourced. There could be huge scope for the PIC to double that number,” she tells Moneyweb.

“The PIC has done an incredible amount and benefitted the participants in the survey [black-owned firms]. For many, their client is the PIC.”

At the same time, the PIC has become a hindrance due to its dominance in the asset management industry. “Because the PIC has a huge asset base, they will often dwarf the client base of black asset managers. A black asset manager would come into the industry and target assets from the PIC. And that’s all they focus on. It then becomes a problem when the PIC decides to redeploy their assets somewhere else,” says Rentzke.

After all, the PIC and other asset consultants could deploy investment money to well-established firms including Allan Gray, Investec, Coronation, and Stanlib.

Asisa’s figures – which are compiled using figures made available by retirement funds to the Financial Services Board and Reserve Bank – include the value of retirement fund assets, life company assets, and collective investment schemes.

“The downturn in the economy has resulted in job losses, triggering retirement fund withdrawals, thereby shrinking the pool of retirement savings available for investment,” says Akona Mlamleli, the head of transformation at 27four.

Mbatha says black managers could increase their market share in SA’s investing and savings industry “three fold in the next 18 to 24 months” if state-owned enterprises like Eskom and Transnet included black-firms in the management of their pension funds. 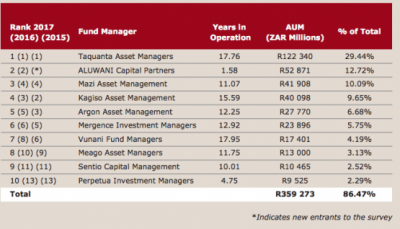 The recently revised Regulation 28 of the Pension Funds Act, which notes that trustees should give consideration to black managers or B-BBEE, is expected to be a game changer when it comes to transformation in the asset management industry. But this is not a dead cert, says Rentzke.

“There’s nothing that forces trustees to consider black managers. Trustees need to consider BEE requirement and responsible investing. The trustees will put a broad policy on B-BBEE, but there might be nothing that translates to action. For most funds B-BBEE sits as an option.”