A few incidents were reported during the shutdown, including motorists being diverted off the road on the N1 at the Engen OneStop in Kraaifontein, Cape Town. The National Joint Operational Structure (NatJOINTS) has directed law enforcement to activate their contingency plans in all provinces during the National Truck Shutdown to ensure the protest is policed efficiently.

The shutdown was sparked by “sporadic attacks” on trucks across South Africa, including social media posts calling for attacks on foreign national truck drivers.

In a statement on Tuesday by the department of labour and the police, they said there would be “zero tolerance” towards intimidation against truck drivers or other road users.

“Law enforcement will ensure that there are no criminal activities and that the lives of law-abiding citizens are not put in danger,” it said.

ALSO READ: We have a confused minister, striking truckers say

It added that the NatJOINTS had been briefed on the outcomes of a meeting between the Road Freight and Logistics Task Team, convened by the KwaZulu-Natal Premier’s office.

“The All Truck Drivers Foundation (ATDF) did not attend the meeting despite being invited,” it said.

Ministers in the NatJOINTS said they had noted concerns in the independent trucking industry and urged them to work with law enforcement, condemning violence by all stakeholders.

“We call on Road Freight Industry workers to air their grievances and to stage protests within the confines of the law as it is within their right to do so.

The ministers also commended the NTDF for distancing themselves from violence and the shutdown, but said they were “dismayed and disturbed by the actions of the splinter groupings that continue to involve themselves in sporadic violence against trucks on our national roads, social media threats and the calls for shutdown”.

“We have instructed the police to deal decisively with those involved as we cannot tolerate further disruptions to the economy after the lockdown we had,” the ministers said.

They added that they were aware of public concern over the presence of foreign nationals in not only the trucking industry, but also in other sectors “in the midst of high unemployment rate in the country”.

In this regard, it called for the fast tracking of labour and emigration policies.

“The Employment and Labour and Home Affairs were urged to fast-track the international immigration and labour migration management policy and legal matters, to escalate these matters to Cabinet.

“We will also address some of these matters with our counterparts within the Southern African Development Community (SADC) and the African Union,” they said.

A few incidents were reported during the shutdown, including motorists being diverted off the road on the N1, according to Maxine Jordaan, spokesperson for the City of Cape Town.

Jordaan said the N1 outbound had been closed at the Engen OneStop in Kraaifontein.

“Motorists are being diverted through the Engen garage and back onto the N1 by officers on scene,” she said.

Multiple trucks were also reported across the N7 between Atlantis and Morningside where officials diverted drivers onto the shoulder of the road. 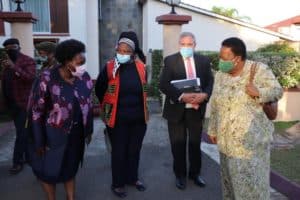 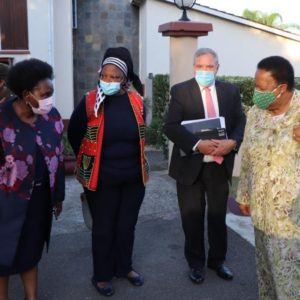