According to regulations, Eskom is allowed to recover 'prudently and efficiently incurred' costs of electricity generation, to the tune of R6.04 billion. 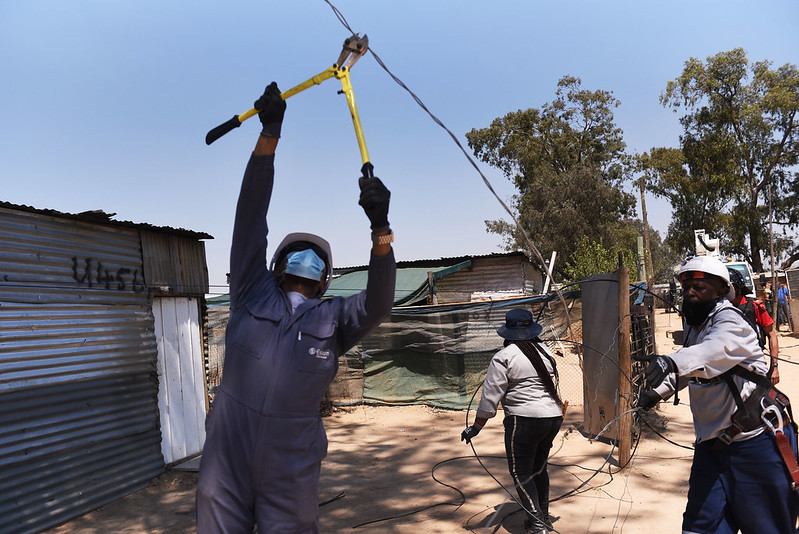 Eskom workers remove illegal connections at Diepsloot in Johannesburg, 28 September 2020, during the launch of the energy management and loss campaign in Gauteng. Eskom removed illegal connections and equipment leading cause of network overlooking and repeated transformers and mini-substations. Picture: Nigel Sibanda

South African power utility Eskom can recoup an additional R6.04 billion ($400 million) from customers via tariffs, the energy regulator said on Thursday, after a court set aside several of its earlier decisions.

State-owned Eskom is mired in a financial crisis and struggles to power Africa’s most industrialised economy because of regular faults at its creaking coal-fired power stations.

It argues that one of the major reasons for its financial woes is that regulator Nersa has consistently awarded it lower tariff increases than it has applied for. The regulator says it tries to strike a balance between Eskom’s interests and those of power consumers.

But in two rulings last year, the High Court set aside a series of Nersa’s decisions, calling some of them “procedurally unfair” and “irrational”.

The regulator said at a news conference that if Eskom were to recoup the whole R6.04 billion during 2021/22, it would result in an estimated tariff increase of 10.95%, factoring in earlier clawback decisions it had taken.

But it said it had not yet decided over what time period Eskom could recoup the additional revenue.

Eskom said it would check whether Nersa’s latest decisions were in accordance with the High Court rulings.

According to regulations, the company is allowed to recover “prudently and efficiently incurred” costs of electricity generation.

But when it is not allowed to recover these via tariffs, “Eskom is required to depend on more and more debt as well as further equity support from government to continue to provide the electricity service,” it added in a statement.

'It's an assumption': Duarte clarifies ANC's claims of sabotage at Eskom
11 hours ago
11 hours ago

Stage 4 load shedding cripples businesses - and costs about R2.8bn
19 hours ago
19 hours ago

'It's an assumption': Duarte clarifies ANC's claims of sabotage at Eskom
11 hours ago
11 hours ago

Stage 4 load shedding cripples businesses - and costs about R2.8bn
19 hours ago
19 hours ago