Industry data shows that waste pickers are saving municipalities up to R750 million a year in costs related to landfills. 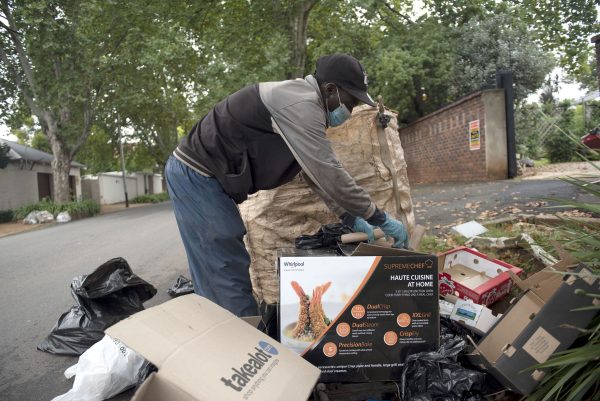 The City of Joburg (CoJ) wants to charge all “affluent” households a levy of R50 per month from July to fund its separation-at-source recycling programme.

This proposal is part of its tariffs for 2021/2022 tabled in council in late March, with public comments closing on Saturday.

The “mandatory” programme is already in place as a trial in many of the northern suburbs and requires households to separate waste into two bags – a normal black bag and a separate clear bag (provided by the city) for recyclable items that is not placed in the Pikitup bin. These are collected separately by two separate fleets of vehicles.

The draft tariffs propose that “affluent households at various suburbs excluding those located in areas classified as township and informal settlements will be charged additional levy at an amount of R50 per month for all properties with a market value above R350 000”.

At the high end (properties with a value of over R5 million), the effective increase will be 18% (from R368 to a total of R433). Some have described the new levy as a “stealth tax”.

The fundamental problem with this plan is that it attempts to address an issue that the market has already solved.

The (likely) tens of thousands of informal waste pickers who weave along the city streets with their trolleys each morning ensure that all recyclable items of value are removed from those clear bags.

One estimate says that waste pickers collect as much as 80% of “post-consumer packaging and paper material”, putting our recycling rate on par with some countries in Western Europe.

What remains, then, are items that are difficult, uneconomical, or impossible to recycle (assuming that households correctly sort material is quite a stretch).

The city is spending a small fortune on contracted service providers who drive special trucks around suburbs to collect noticeably empty bags. From July, the R50 a month levy will fund the initiative.

Industry data shows that waste pickers are saving municipalities up to R750 million a year in costs related to landfills. In Joburg, one could easily see this number at around R50 million a year.

Municipal collection sites could be established (or expanded) to enable the waste pickers to see their material at a better rate than the current informal system surely yields (the city could work with larger recycling entities to purchase this recyclable material in bulk).

This is a far better solution to the current informal system where vacant land (mostly the city’s) is being used by waste pickers to sort their material.

A section of the Braamfontein Spruit near Peter Place has become a small village, with mountains of plastic bottles and cans and dozens of informal dwellings.

On paper, the city’s plan is laudable. It likely made sense in a PowerPoint deck once.

But the implementation of the trial from 2018 was already too late. In 2021, a full rollout is completely nonsensical.