Scale of SA looting destruction: the numbers are huge

Preliminary numbers are in: Seven listed retailers have indicated that damaged stores total 1048 across two provinces, with billions lost. 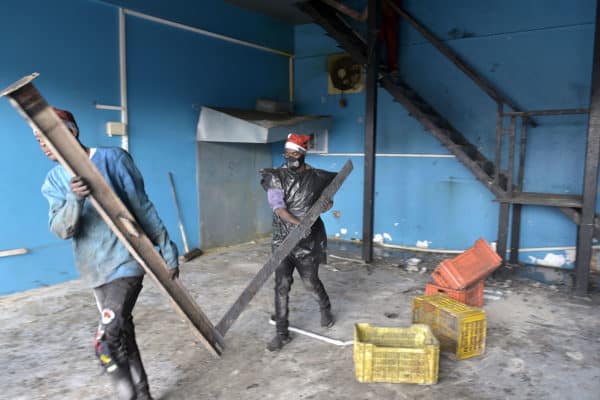 Workers remove what little is left of the Fish and Chip shop in the area of the Pan Africa Mall in Alexandra, Johannesburg, on Friday. The area was one of the hotspots of looting recently and the vast majority of businesses in the area are wiped out. Picture: Neil McCartney

It is not yet clear just how extensive the destruction of particularly retail and warehouse property and the looting of stock in the unrest in KwaZulu-Natal and Gauteng was.

Earlier in the week, the South African Property Owners Association (Sapoa) said “some 800 stores have been looted and 100 malls have been either been burnt down or have suffered significant fire damage and a number of distribution centres particularly in Durban, KwaZulu-Natal, have been looted with serious structural destruction”.

Both the NatJoints and the Sapoa figures are on the low side.

Thus far, seven listed retailers have provided updates on the number of their stores impacted and the damaged stores total 1 048 across the two provinces.

Factoring in non-listed retail groups, the listed counters that have not provided any update, and independent stores, the number is almost certainly higher than 3 000 stores (more than three times the figures reported thus far).

Pepkor said on Friday “to date, 489 retail stores representing about 9% of the group’s total retail stores have been damaged and looted as well as one of the JD Group’s distribution centres in Cato Ridge, KwaZulu-Natal”.

It added “the group’s supply chain and distribution operations in the affected areas have been severely disrupted and numerous additional measures, including tactical security, have been put in place to safeguard the group’s distribution infrastructure and assets”.

TFG Limited says “about 190 South African stores have been looted and damaged to varying degrees”. It adds that “a distribution centre operated by one of our logistics service providers as well as the manufacturing premises of one of our local suppliers have also been damaged by fire during the unrest”.

Spar said on Friday “as a result of looting and vandalism over the past few days across Gauteng, and predominantly KwaZulu-Natal, a total of 184 stores (including 62 TOPS liquor stores and 31 Build-It stores) have been severely impacted”.

“This represents roughly 7% of the Spar store network across southern Africa,” it said.

In addition, the group has had to temporarily close a further 539 stores across its six divisions.

Massmart says “protesters gained access to and made off with merchandise in 18 Cambridge stores, 10 Game stores, eight Builders stores, three Cash & Carry and two Makro stores”, adding that: “Two of our distribution dentres have also been directly impacted. Altogether four facilities have suffered significant damage due to arson.”

The Makro figure seems inaccurate as reports suggest that its Pietermaritzburg, Springfield and Cornubia stores were looted.

It must be noted that the 99 Famous Brands stores are likely all operated by independent franchisees; in other words, they are not corporate stores.

Also on Wednesday, Cashbuild said “a total of 36 stores (32 Cashbuild and 4 P&L Hardware stores) have been damaged and looted and are currently unable to trade”. On Monday, Woolworths said “eleven stores have been looted and severely damaged with nine of the eleven stores in KZN and two in Gauteng. Although looters gained entry to the Woolworths Maxmead Distribution Centre (DC) in KZN, the infrastructure was not severely damaged and has been secured, together with our other DCs.”

The new owner of Edgars, Retailability, told Business Day on Friday that 50 of its stores had been looted (nine of these were burnt).

Many have yet to disclose

We do not as yet have numbers for Shoprite, Pick n Pay, Lewis Group, Clicks Group, Dis-Chem Group, and Truworths.

Given the types and locations of most of the retail assets targeted, some of these numbers are likely to be substantial.

Based on the numbers disclosed by Spar, it is unlikely that Shoprite Holdings and Pick n Pay (which owns Boxer) would’ve had fewer than 100 stores each looted. One source has suggested to Moneyweb that this figure is closer to 400 between the two groups.

Both have been very tight-lipped to date.

So far, Shoprite has said only that: “As the authorities are restoring stability in pockets of KZN and Gauteng, the Shoprite Group is working around the clock to repair and restock looted and damaged stores. These stores are becoming operational and are reopening for business by the hour while the safety of customers and employees remains paramount.”

The major banks have also been guarded with their disclosures.

The Banking Association of South Africa says “over 1 400 automatic teller machines (ATMs) and close to 300 bank branches and post office outlets have been vandalised in the ongoing violence in KwaZulu-Natal and Gauteng … To safeguard their employees, banks were compelled to close over 1 300 branches between 12 and 14 July”.

Nedbank last week confirmed that 37 branches and 117 ATMs were damaged.

Sapoa says those malls “that have suffered relatively little damage may take a couple of months” to reopen, while “where a mall has been burned to the ground, is likely to take at least two years”.

Beyond the retailers, Stor-Age says its Waterfall facility located in Hillcrest “has been extensively looted and then certain parts of the property set on fire”.

Tiger Brands says “a number of our sites in KZN have been affected by acts of looting and vandalism resulting in damage to our Rice and Snacks & Treats operations … It is currently estimated that the loss of stock is in excess of R150 million”.

A major distribution facility in Riverhorse Valley owned by Investec Property Fund and leased by RTT “suffered substantial damage as a result of looting and parts of the property being set on fire”.

About a dozen listed property funds and real estate investment trusts (Reits) have provided updates on their respective assets that were damaged.

Peter Attard Montalto, head of capital markets research at Intellidex, says “we think investors still don’t really get the scale of what has happened”.

Even this number seems too low, given the sheer number of outlets impacted as well as the damage to very big stores with a large amount of stock, such as Makro.

In the broader Durban area, Attard Montalto estimates R15 billion in damage to property, with R1.5 billion in stock lost.

He says as many as 50 000 informal traders and around 40 000 businesses have been affected.

However, many of the impacted retailers have quietly confirmed that jobs will not be cut while stores are restocked and rebuilt. Attard Montalto puts the impact to Durban’s GDP at R20 billion.

Overall, he estimates the ‘total cost at about R50 billion and the GDP loss at about R40 billion’.

He cautions that Intellidex is “concerned about the impact into lower long run potential growth from foreign direct investor and local investor risk aversion”.

“We are concerned that KZN is now seen as completely uninvestable by foreign direct investors and local investors. As we commented before, the Richards Bay Minerals assassination and construction mafia problems [were] already creating unaddressed concerns about the state of the police and security structures in the province.

“Now the cost of rebuilding in KZN will have to be weighted versus higher security and insurance costs though the upside of the port is obviously substantial versus most other provinces (or other neighbouring countries),” says Attard Montalto.

“The government may have to have difficult conversations with FDI [foreign direct investment] investors about staying in KZN or relocating to the Western Cape or perhaps Gauteng.”