The opposition party has created a template that companies who weren't insured or sufficiently insured can use to try to force state payouts. 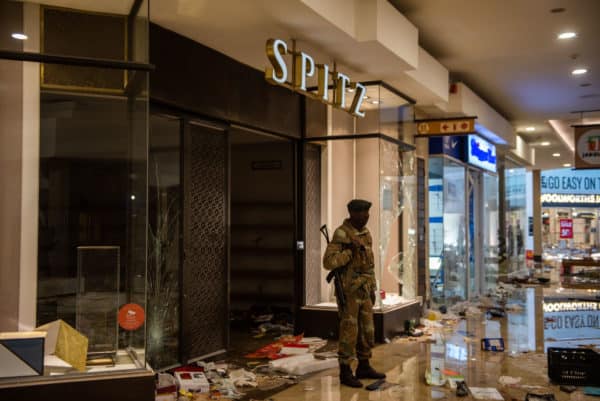 SANDF members walk inside Jabulani Mall on July 13, 2021 in Soweto, South Africa. Members of the South African National Defence Forces (SANDF) were deployed to assist the police to quell the violent protests that started in KwaZulu-Natal last week with Zuma's supporters calling for his immediate release and have now spread to some parts of the country. Picture: Gallo Images

In a statement on Tuesday, the DA said it was working to make it easier for members of the public to send letters of demand to the government for the damages and losses they suffered during last week’s spree of looting and sabotage in KwaZulu-Natal and Gauteng.

MP Advocate Glynnis Breytenbach said the party had drafted a template people could use to create their own letters of demand to Minister of Police Bheki Cele and President Cyril Ramaphosa after tens of billions of rand in infrastructure and products was lost.

Anyone who “suffered loss and damage due to the inactions of the South African Police Service (SAPS) during the riots last week” would be able to use their template, she explained.

“Members of the public can use this template to claim damages from SAPS in terms of section 3 of the Institution of Legal Proceedings Against Certain Organs of State, Act 40 of 2002 for businesses that have been destroyed and products that have been looted because the police ultimately failed in their constitutional mandate to protect businesses from the damage caused by looters. The DA is making this pro forma available to assist those members of the public who suffered damages to be able to formally and timeously inform the state of their intention to claim damages in those cases where [insurance company] Sasria fails to fully compensate them for the damages suffered.”

Breytenbach alleged that because the police had “failed to act in a timely manner to indications of the looters’ intent to bring South Africa to its knees”.

She said the police had failed to foresee that “the violence incited and encouraged on various social media platforms would lead to widespread anarchy, but they also reportedly ignored warnings from the intelligence communities”.

“And as the police struggled to curb the violence, thousands upon thousands of jobs went up in flames and communities had to protect themselves against dangerous criminals intent on destruction at any cost.

“The top structures of SAPS did not only fail to protect businesses and law-abiding citizens, their poor planning and grasp of the situation that failed to have enough feet on the ground also put SAPS officers’ lives in danger.”

The DA urged the public to complete the letter and submit it to SAPS and the president.

“Many of the destroyed businesses did not have sufficient insurance and would be dependent on the damages owed to them by SAPS to try and get back on their feet.”

On Friday night, Ramaphosa referenced “preliminary reports compiled by NatJoints [the National Joint Operational and Intelligence Structure]” which said “extensive damage has been caused to 161 malls and shopping centres, 11 warehouses, 8 factories and 161 liquor outlets and distributors”.

Earlier in the week, the South African Property Owners Association (Sapoa) said “some 800 stores have been looted and 100 malls have been either been burnt down or have suffered significant fire damage and a number of distribution centres particularly in Durban, KwaZulu-Natal, have been looted with serious structural destruction”.

Thus far, eight listed retailers provided updates on the number of their stores impacted and the damaged stores totalled 1,059 across the two provinces on Monday.

Moneyweb reports that Both the NatJoints and the Sapoa figures were on the low side.

When factoring in non-listed retail groups, the listed counters that had not provided any update, and independent stores, the number was almost certainly higher than 3,000 stores (more than three times the figures reported thus far).