Medupi explosion may not mean more load shedding, but will cost Eskom billions

Damages are estimated to cost at least R2 billion, and could take up to two years to fix. 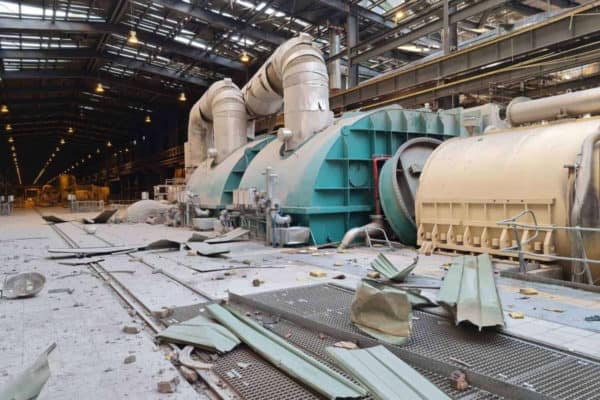 The aftermath of a devastating explosion at Medupi coal-fired power station on 8 August 2021. Photo: Twitter/@chrisyelland

An explosion at one of Eskom’s newer coal-fired power plants last week could cost the embattled power utility billions, and potentially worsen an already bleak outlook for periodic load shedding.

The explosion, which was reportedly felt as far as 60km away, occurred at the Medupi power plant near Lephalale in Limpopo.

The plant’s unit four generator has been destroyed, and occurred while hydrogen was being displaced with carbon dioxide and air to identify an external leak.

ALSO READ: Another setback for Medupi plant after unit explodes

Independent energy expert Chris Yelland revealed to The Citizen this week that he was told by sources at Eskom that employees had deviated from strict safety protocols.

What should have happened?

Yelling explained to Moneyweb’s Fifi Peters that before a generator could be opened up, it needed to be purged of hydrogen gas.

Carbon dioxide is pumped into the generator to displace the hydrogen gas, to avoid mixing normal air and hydrogen, an “explosive mixture” bound to cause problems.

“This then avoids the mixture of air and hydrogen.”

But this is not what happened.

Instead, air was put into the generator before hydrogen was removed, which ignited and caused a massive explosion.

The entire generator has, as a result, been destroyed beyond repair, and now has to be replaced, which Yelland said involved taking more time and costing more money.

So far, the plant has cost around R250 billion.

Eskom CEO André de Ruyter recently told News24 that the explosion could add up to R2 billion to the extensive power plant bill, and could take up to two years to replace.

The results of an investigation are not yet complete, which means it could cost even more money.

Yelland revealed there was talk of taking unit six of the Kusile power station and moving it to Medupi, which would save time, but nothing had been confirmed yet.

This would save time, however, it could potentially cost Eskom more than ordering a new generator and installing it.

But then again, time is money, he said.

The reason a generator takes time to be replaced is because it is a bespoke design specifically made for the Medupi project. It also has to be shipped from France.

ALSO READ: Why SA hasn’t had load shedding in more than a week

Explosion while other repairs are pending

Yelland said the plant was “beset by problems and delays and cost and time overruns”, costing South Africa dearly, especially when it came to load shedding.

All six units of Medupi were meant to be completed by the end of 2014.

But the plant’s flue-gas desulphurisation plant, which is a measure to control pollution and toxic greenhouse gas emissions, would only be ready by 2030.

“So in fact the plant is not ready, but all six units have been handed over for commercial service,” Yelland said, in response to a statement released by Eskom prior to the explosion.

Each of the six generators is meant to contribute 720MW, but two of them – one being unit four – have been down since the explosion took place.

Unit five tripped when the explosion took place, but luckily has not been damaged.

However, if unit five is not up and running soon, Yelland said the country would be down by 720MW “for a long time”.

This does not necessarily meant that the country is guaranteed to have load shedding as a direct result of the Medupi explosion, however.

“But the problem is when you have a number of these generators out of service simultaneously.

“We do know that Eskom is experiencing high levels of unplanned outages and it also has to do a certain amount of planned maintenance, which takes units out of service.

“So the combination of these unplanned outages and the planned maintenance means that currently things are quite tight between supply and demand.”