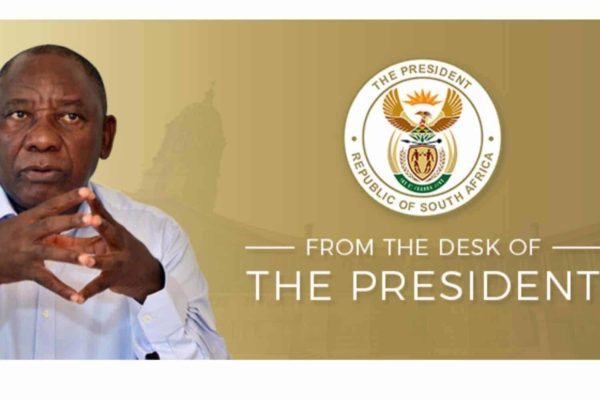 In his weekly letter to the nation, President Cyril Ramaphosa said although the Covid-19 pandemic had catastrophic repercussions for South Africa’s economy, the rate of investment drive is finally beginning to gather pace.

“This means that around 38% of the total investment commitments – or R290 billion – have to date flowed into the economy.”

He said investments in energy, pharmaceuticals and vehicle manufacturing are just some sectors with promising future commitments to strengthen the economy.

This progress is despite the country’s fourth investment conference being moved to March 2022, in order to accommodate current events, such as the local government elections, the COP26 climate conference and the Intra-African Trade Fair.

“Another important reason for holding it next year is that there will be far greater COVID-19 vaccination coverage by then, making both travelling and gathering easier,” Ramaphosa continued.

From the desk of the president:

Normally, this is the time of year when we bring together investors from across the country and around the world for the annual South Africa Investment Conference.

We held the first Investment Conference in 2018 as part of our ambitious drive to raise R1.2 trillion in new investment over five years. The conference was attended by over a thousand delegates in 2018 and 2019, and in 2020 was held in a hybrid format due to the COVID-19 pandemic.

Together, these conferences raised just over R770 billion in investment commitments across a wide range of economic sectors.

The fourth South Africa Investment Conference would have been held this month, but we decided to move it to March next year due to several other events taking place at this time. These include the local government elections, the COP26 climate conference and the Intra-African Trade Fair, which starts in eThekwini next week. Another important reason for holding it next year is that there will be far greater COVID-19 vaccination coverage by then, making both travelling and gathering easier.

Although the fourth Investment Conference has been held over by a few months, our ambitious investment drive continues. Even in the midst of the challenging economic environment caused by the COVID-19 pandemic, which was exacerbated by the violence and destruction that occurred in parts of KwaZulu-Natal and Gauteng in July, companies continue to make good on their commitments and to look for other investment opportunities in South Africa.

Just two weeks ago, I attended the launch of Toyota’s expanded production line in eThekwini, which will produce South Africa’s first locally-made hybrid car. This investment was the result of a R2.4 billion commitment the company made at the 2019 South Africa Investment Conference. Also in KwaZulu-Natal, Tetra Pak is expanding its operations with an investment of R500 million.

Pharmaceuticals is an exciting new area of growth.

Aspen Pharmacare recently launched its R3.4 billion expansion, which it announced at the 2018 Investment Conference. This investment has turned Aspen’s Gqeberha manufacturing facility into one of largest global manufacturing hubs for general anesthetics and has also provided capacity over 100 million doses of the Johnson & Johnson COVID vaccine have been produced under contract.

The World Health Organization also chose South Africa to host an mRNA vaccine manufacturing hub with the Biovac Institute, which is a public-private partnership with government. South African-born Dr Patrick Soon-Shiong and his company NantWorks recently announced an ambitious initiative to build capacity for advanced health care in Africa. In addition to the investments they will bring, these developments will also contribute to our collective ambition for the continent to manufacture 60% of its vaccine needs by 2040.

Energy is another area of growth. The 25 preferred bidders in the fifth round of our Renewable Energy Independent Power Producer Procurement Programme are together expected to invest around R50 billion into the economy. The increase of the licensing threshold for embedded generation to 100 megawatts is likely to result in substantial private investment in electricity generation projects.

South Africa has recently secured an initial commitment of around R131 billion to fund a just transition to a low carbon economy by investing in renewable energy, green hydrogen and electric vehicles. This commitment by the United States, United Kingdom, France, Germany and the European Union is in line with the Paris Agreement, which obliges wealthier countries to support decarbonisation in the developing world.

These energy investments will help us overcome the debilitating load shedding that the country is currently experiencing, as new electricity generation capacity comes online.

Several new investments in datacentres and undersea cables will not only bring in new investment, but will provide the infrastructure needed for the growth of technology and telecommunications industries.

An important part of our investment drive are the far-reaching structural reforms we are undertaking in areas such as energy, telecommunications, water and ports and rail. These reforms will improve efficiency and competitiveness, bringing down the cost of doing business in South Africa, and encouraging greater private investment in our economic infrastructure.

We now have 13 special economic zones across the country, providing investors with targeted investment incentives, preferential tax rates and export support. These provide an attractive manufacturing base for companies seeking to supply both local and international markets. Their value has increased further with the establishment of the African Continental Free Trade Area, which officially commenced trading at the beginning of the year.

While the rate of investment has slowed due to the effects of the pandemic, and several projects have been delayed, the investment drive is beginning to gather pace once again.

As we make progress with the implementation of the Economic Reconstruction and Recovery Plan – with its focus on infrastructure, industrial development, employment and structural reform – the environment for investment will improve further.

Through the investments that are now underway, through the work that social partners are doing to expand local production and through the progress we are making on key reforms, we are building a firm foundation for the success of the fourth South Africa Investment Conference next year.

Most importantly, we are building a firm foundation for a sustained economic recovery that encourages further investment, creating more jobs and providing new opportunities for emerging businesses.