Three lessons the trade union would be wise to bear in mind. 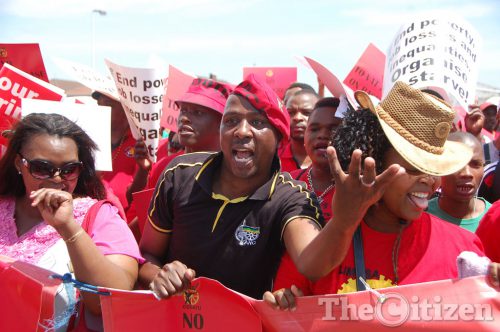 The new leaders of Cosatu had barely settled into their congress-approved chairs before they were up in arms over President Jacob Zuma signing into law the Tax Laws Amendment Act last week.

The act effectively ensures that as of March 1, two-thirds of a worker’s provident fund savings is annuitised for contributions on retirement. A recent SAfm Market Update show with Moneyweb explored the matter; the podcast/transcript is available here: Zuma signs tax changes into law.

I don’t know about you, but the minute Cosatu started making noise about it, I was struck with these words from a Ray Charles song:

I’ve been there before

And I’ll try it again

But any fool knows

That there’s no way to win

Yep, we’ve been here before. Three years ago when e-tolls were about to be implemented, labour started singing a song all too familiar about lack of consultation, to which Jeremy Cronin, who at the time was Deputy Minister of Transport, simply retorted “unfortunately the horse has bolted”.

(Interestingly, this time around the government’s response has been rather muted. Could we expect a response during the State of the Nation or Budget speeches?)

Both then and now, outcry against the signed bill is caused in part by pettiness, egotism and differing ideologies; Cosatu is claiming to have not been consulted enough; and there is a rising tension between labour and its alliance partners.

Here are three lessons the federation should heed and would be wise to keep in mind, now and in the future:

Lesson #1: Being one third of the alliance doesn’t mean getting things your way

Over the last ten years, workers have started to question the validity and benefit of their federation being an alliance partner to the ANC – the ruling party – and the South African Communist Party (SACP). Perhaps at its inception it made sense – after all these are comrades who went to war together to end the tyranny of apartheid.

Over the years we’ve seen how a large number of trade union leaders became business people. Some, naively thinking they could influence government’s policy, accepted ministerial positions. History has shown that, leading to the 1994 elections, when 20 prominent Cosatu leaders were chosen to stand for the ANC with the intention of giving the workers a voice in Parliament, it became clear that they would have to subject themselves to the rules of the ANC. Meaning, for all their good intentions of championing the workers’ needs, ultimately, they’d have to put the interests of the ANC and that nation above that of the workers.

An example of this is when the 1998 government decided to shift its policy from RDP to GEAR. Even tough labour had expressed unhappiness with a policy (GEAR) they deemed ‘neoliberal’ and had been critical of some of its policies in their alliance meetings. The ruling ANC made it clear that it would go ahead and implement GEAR – a policy perceived by Cosatu as market-friendly and worker-hostile.

The signing of the tax bill has made the President look like the reasonable adult in the room, while Cosatu looks like a team member who cried foul when things didn’t go their way – petulant and full of tantrums.

Lesson #2: Make sure you do not make a fool of yourself

The saddest part of labour’s reaction to the signing of the tax bill was how it exposed the forgetfulness of union leaders. Their outcry is almost completely oblivious to the reality of what took place before. I will stop short of insinuating that there’s a self-induced amnesia when it comes to this matter. Perhaps it is worth retracing the steps back to 2012 when National Treasury released four discussions papers on retirement reforms.

Pardon my state of boredom over the current hullabaloo; we have been through this many times before but here go again. It is public knowledge that to date, National Treasury has had more than 35 meetings with Nedlac constituencies, unions and their federations since June 2012.

Labour has always refused the retirement reforms, especially when tabled without the release of a social security system that’s not fragmented (in other words, a legislative reform introducing an integrated social security system which provides holistic benefits). In October last year, National Treasury presented its final report on the matter ‘Implementing tax and harmonisation retirement reform’ to the finance steering committee.

What does not help is voluble and excited talk by labour, which should know better than to stir up panic among its members. Especially when evidence points to the lengthy and detailed path of consultative processes that included it.

Lesson #3: In a partnership, you must make compromises.

The bane of the now clearly cracked marriage of labour and its alliance partners is that the price of everything is very hard to recognise, let alone predict. Much like a real-life relationship where actions have good or bad consequences, so too does the Tripartite Alliance have its built-in consequences. There will be two, or in this case one dissatisfied partner.

There will always be compromises; unfortunately for labour, it seems it will have to do most if not all of it. That’s the price of being in an alliance.

I for one do not understand the dramatics of those leading labour. Could their reaction be a show boasting that they are still independent and are not reduced to a labour desk as many have predicted? Or did they over-promise to their members and are now left red-faced?