'We thought how cool would it be if we could create a platform that reacted to music from different regions,' says Bryan from the Ubunifu Space. 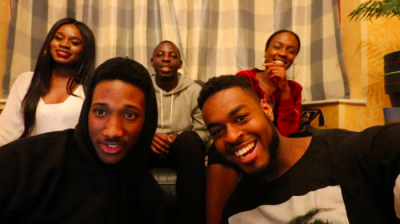 If you keep an eye on YouTube’s Trending tab, you would be well aware of the Ubunifu Space. This vlogger crew exists to spread good music in the UK and Kenya by reacting to songs their fans request – and they’re far from done.

What makes a great YouTube video? The Ubunifu Space has found a recipe, and it’s working very well for them. This collective has shone a light on South African hip-hop, and over 16 million views later, it’s obvious the South African YouTube community can’t get enough of them.

This collective has shone a light on local music, and we wanted to get to know the team better.

The reason they do these reaction videos – in the words of the founder of the Ubunifu Space, Bryan – is to create a platform that spreads awareness around songs that are popping in different pockets around the world.

What is the connection between the UK and the Kenyan team?

Bryan: I’m cousins with Ray and Don who are in the first Kenyan reaction video. I spoke with Ray, and the idea came about. I felt within the UK, we needed to showcase sounds coming out from regions such as south, east, and central Africa, as all we ever hear at Afrobeat parties in the UK would be from West Africa. At the same time, having been out in Kenya with them previously, I would also show them the new sounds from the UK, and they started to fall in love with the UK Grime/Rap sounds – and these weren’t getting much coverage in Kenya. We thought how cool would it be if we could create a platform that reacted to music from different regions and have two different teams that would react to the sounds. The UK team (who all have roots in Africa) is made up of Bryan (Kenya), Monique (Zimbabwe/Cameroon), David (Ghana), Sade (Nigeria), Ian (Uganda) and Tonye (Nigeria), while the Kenyan Team has Ray, Don, Laura, Collins, Cate and Michelle.

What has been the most rewarding part of your journey?

Bryan: I think to find out about different artists we may never have heard of if it wasn’t’ for people’s suggestions. Also, learning about parts of cultures has also been great. An even more rewarding part of the journey, is just seeing the interaction between viewers from different regions.

Your platform is the epitome of internet culture. Where do you guys see The Ubunifu Space ending up?  It has the potential to make an impact outside of the internet.

Bryan: I would love to see the Ubunifu Space be a platform or an organisation that can assist in showcasing the great creative talent coming out of Africa. Music has obviously been a great export of Africa in the past, but there is so much more coming out from young creatives in the continent, and we would love to create something that can showcase the work to the world.

You’ve reacted to quite a few South African artists’ work. Which has been your favourite, and why?

Bryan: For me, it has to be “Vura” by DJ Citi Lyts, Sjava & Saudi. Although it was the second song we reacted to from SA, it has really stuck in my mind and is currently in my playlist. It just has such a perfect balance of the US Rap/Trap sounds mixed with unique instrumentals that were very distinctive, and then merged with the rapping in Zulu and English… It was just a masterpiece for me. On top of that, the visuals were very clean. It also gave us great insight into the vura, a big part of South African culture – which was really cool. Thanks to all the guys in the comments for explaining the meaning!

Ian: I loved “Vura” as well. I just love the way the beat is composed, and it’s just a chilled, vibey tune to sit back and chill to.

Monique: “Gobisiqolo”. I thought it was South African house initially, but now I know its actually a Gqom track. It’s wonderful. The vibe, the beat… It’s infectious, and it got a 3-second wheel up – which is an Ubunifu record. If this track was played in the UK in a club, it would bang.

Tonye: I liked Cassper Nyovest’s “Tito Mboweni”. It was such a turnt, bouncy trap song, and then the chorus and the hook was just catchy for me. At the same time, it had that unique South African relevancy, as we later found out who Tito Mboweni was, so that made it really cool. Also, the “sha-sha” movement, as well as the funny “fah-fah” part made it memorable for me.

David: “GQI” by OkMalumKoolkat was my favourite. The beat is so bouncy, and it has such a catchy hook. The visuals of the video really connect with me as well.

Sade: I really liked “Tito Mboweni” because of the catchy chorus. It allows an audience who aren’t familiar with the language a way to get involved. The sound is something I believe can be appreciated worldwide, especially in England. I also like it because Cassper Nyovest is an incredible artist with a great flow.

In your video where you reacted to “Wololo” by Babes Wodumo and Mampintsha, you mentioned you have to come to South Africa. Any plans in the near future to do so?

Bryan: It’s something that really is in the plans. We would all really love to. I feel from the music we have reacted to, there is so much for us to explore and find out and it seems like such a beautiful country. So yeah, for sure it is definitely in the plans for us to fly out to SA.

You get a lot of suggestions around what’s popping in South Africa. Can you give our South African readers a recommendation as to what they should be listening to out of the UK?

Bryan: The UK Urban scene is going through a crazy period of growth and is starting to gain a lot of attention outside of UK borders. Names to watch out for are the likes of Stormzy, Giggs, J Hus, Dave, AJ Tracey, Skepta, Kojo Funds, 67, Mo Stack, Mist, and Krept & Konan.

Stormzy: Stormzy’s debut album #GSAP, which was released in February, was the first Grime/Rap album to top the UK Top 40 album charts ever and beat a range of Pop artists to it.

Giggs: Giggs is seen as sort of a legend in the UK rap scene. He is seen as the person who started rap in the UK in a style unique to the UK, but not in a way that was an imitation of the US. This year he was featured twice on Drake’s “More Life” Album, and his song “KMT” gained the most attention. As you can see in the link below it gets people going crazy in concerts.

J Hus: J Hus has created his own lane and unique sound with a blend of UK rap, afrobeat style delivery and funny punchlines.  This led to a release of one of the best songs from the UK so far this year, “Did You See”, which French Montana has jumped on to for the remix. Check out his debut album “Common Sense” which came out this year – also very good!

Dave: Dave is only 19, and I remember when we reacted to Nasty C I said the two were very similar. Both have very good lyrical content and punchlines and have achieved a lot at such young ages. Dave made one of the songs of 2016 in the UK called “Wanna Know”, which Drake subsequently jumped on the remix for.

Don E Ft Nado – You Alrite Yh?: Special shout out to these two guys who have just come on to the scene. They released this song which is massive over here in the UK at the moment, and is also our official Ubunifu Space anthem for both UK and Kenyan teams. You can see the whole team’s reaction along with hosts from Capital FM Kenya on our recent trip to Kenya in June.