Kelsey Atkins spent at least 1,000 hours on becoming Priestess Bathory, and the result was, quite simply, as good as it gets. She beat the world. 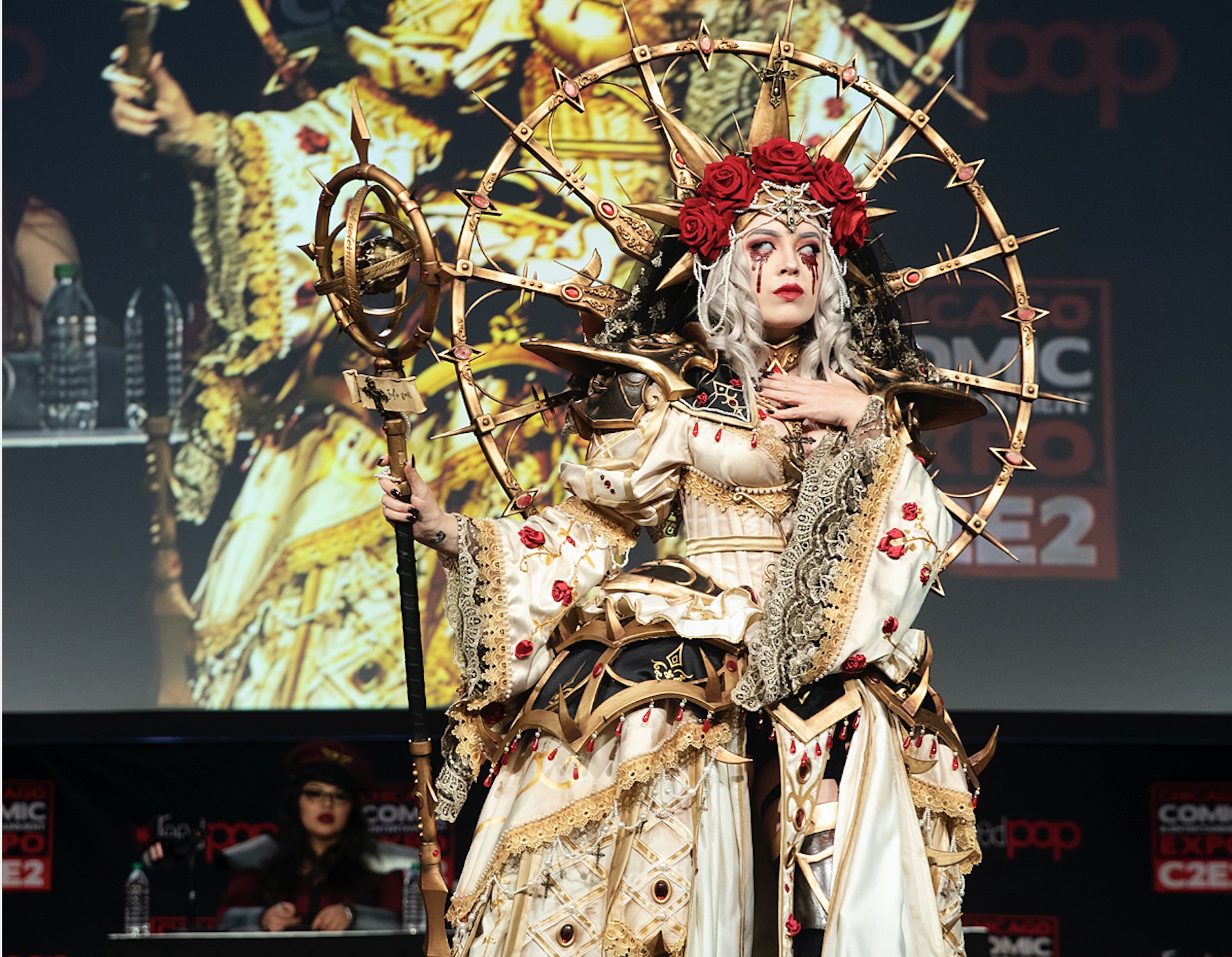 A South African cosplayer this week wowed a global gathering in the US with her astonishing, entirely self-constructed costume – so much so that she took home the crown for first place.

The beautiful Kelsey Atkins was invited to travel to Chicago following her win at Comic Con Africa (CCA) last year.

Ya girl did it! I took home the crown at C2E2 Cosplay Championships! ???? I still cant believe it happened! Everything was such a rush and it has definitely not sunken in yet! It was such an honor to be here and part of this amazing convention and competition! There were some seriously talented and amazing people competing this year and I am so humbled and excited to have met them! Everyone did so well! We all did out best and that was the most important thing!! Well done everyone! ???????????????? #cosplay #cosplayer #jinxkittiecosplay #jinxkittiebutt #cosplayersofinstagram #cosplaydetails #c2e2 #championshipsofcosplay #crownchampionshipsofcosplay #southafricancosplayer #selfie #purplehair #pinkhair #cosplaycrown #omg

Representing her brand JinxKittie Cosplay, she attended the Chicago Comic & Entertainment Expo (C2E2) from 28 February to 2 March, ultimately placing first in a competition that saw her going up against cosplayers from the United States, Australia, China, Austria, Singapore, Indonesia, India, Korea, France and the UK.

Atkins worked with artist Cinderys to create Priestess Bathory – a stunning fantasy artwork that she brought to life through cosplay, the art of dressing up as a character from a work of fiction. Often the characters come from mainstream artists’ creations, but Atkins’ character was a Cinderys original design.

C2E2 was a whirlwind and I’m so sad it’s over already! I am at the airport already to fly home ???? it was such an amazing experience and I got to meet so many amazing people ???? congratulations to @xephyrstudios and @leelookris for their second and third placements in the comp! You guys were amazing!! Hopefully I can visit again soon! ???????? ???? @tmronin Priestess Bathory design by @cinderys_art #cosplay #cosplayer #jinxkittiecosplay #jinxkittiebutt #cosplayersofinstagram #cosplaydetails #c2e2 #championshipsofcosplay #crownchampionshipsofcosplay #southafricancosplayer #

Here is Atkins’ cosplay at CCA next to Cinderys’ design:

JinxKittie Cosplay VS my design ! ❤️????She did Blood Priestess Bathory cosplay for Comic Con Africa and won the official…

Posted by Cinderys – Art and Cosplay on Tuesday, 1 October 2019

Atkins described Bathory as being one of the most challenging cosplays she has ever created, saying she put in more than 1,000 hours on making the costume. She also put in many hours of driving to and from the fabric store to buy several lace trims.

“I don’t know how much I’ve actually, physically spent on the costume in terms of money … but it was a lot,” she admitted to The Citizen.

Priestess Bathory had many eye-catching design elements and details that Atkins spent months on. There was hand embroidery, ribbon work, and beading, as well as pearls for an extra touch of extravagance; then there were all the armour pieces made up of EVA foam and worbla (a thermoplastic), finished off with resin-casted details.

Atkins 3D-printed her primary prop – a staff with a hand-sculpted skull that would spin on a gyroscope, powered by a small motor. The skull’s eyes were lit by two red LEDs and it was weathered with real rust.

Atkins told The Citizen Priestess Bathory was historically inspired, and so she focused a lot on historical methods in creating the costume, such as Victorian corsetry. She explained she weathered the costume with rust, tea staining, dyes and inks, to really bring out the effect of age.

“It’s been a really long journey working on this costume, working almost every day on it for months, right up until the day I left for C2E2.”

And after so much time of working on Bathory, Atkins finally wore the priestess in her completed form at C2E2. Wearing a light grey wig with soft ringlets, white-out lenses, and wet-look special effect bloody makeup as tears, Atkins took to the stage with all the grace of a queen, claiming the C2E2 crown. 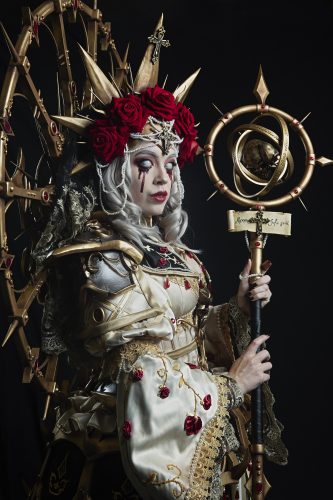 Atkins described the love, care and dedication she put into her Priestess Bathory and how grateful she was that it came through in her work. She also spoke about how much she made sure to pay attention to detail and accuracy in terms of the artwork as well as following historical methods and making things look as realistic as possible.

She is ready ???????? a final look of Bathory’s full dress (without the backpiece, crown, staff and leg armor). Today I leave for Chicago! C2E2 here I come! I spent a lot of time on the tiny details, so many gems, pearl’s, roses, crosses and skulls! And I weathered this cosplay to deathhhh. The fabric and armor look pretty old and disgusting now! Priestess Bathory design by @cinderys_art ???????? #cosplay #cosplayer #jinxkittiecosplay #jinxkittiebutt #cosplayersofinstagram #cosplaydetails #c2e2 #championshipsofcosplay #crownchampionshipsofcosplay #southafricancosplayer

She said: “I would like people to know just how much work went into this, because this really took a lot out of me. Now that I’ve won, it still hasn’t sunk in. It feels like a huge title, like huge shoes to fill. I just hope I can live up to it!” 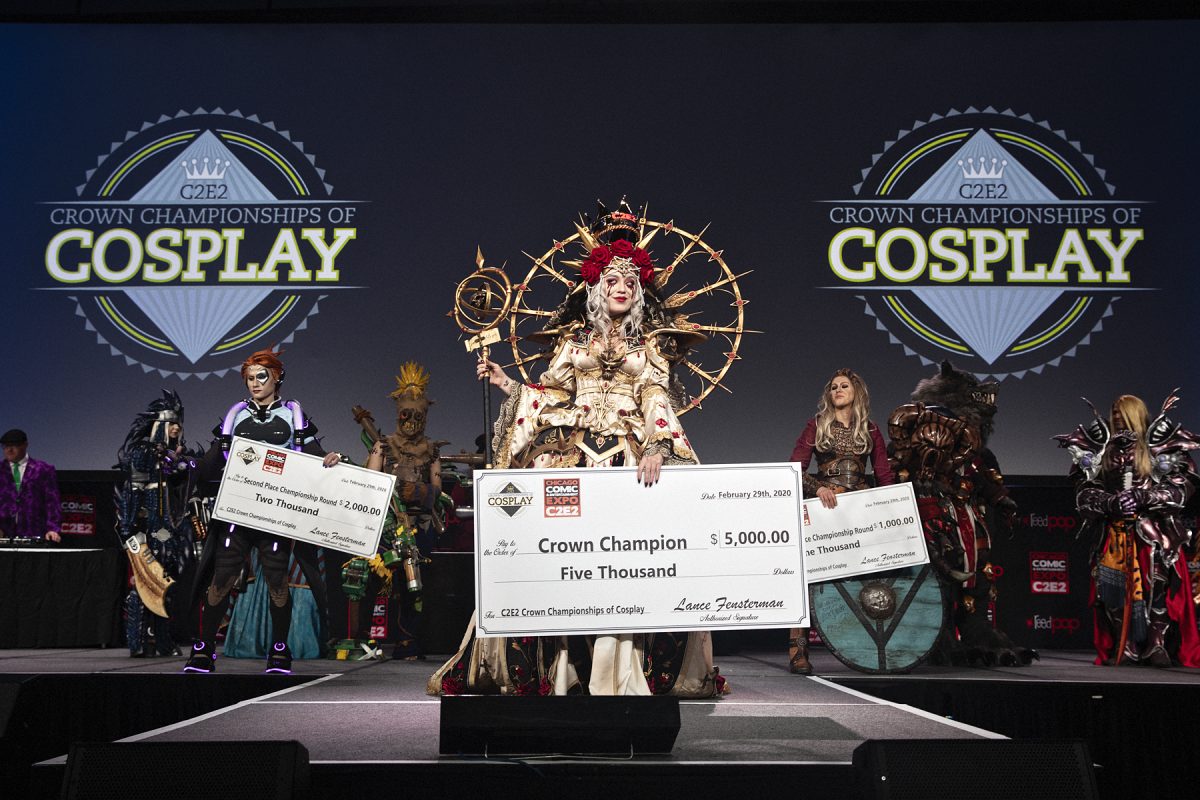